Beliefs about medicines and non-adherence in patients with stroke, diabetes mellitus and rheumatoid arthritis: A cross-sectional study in China 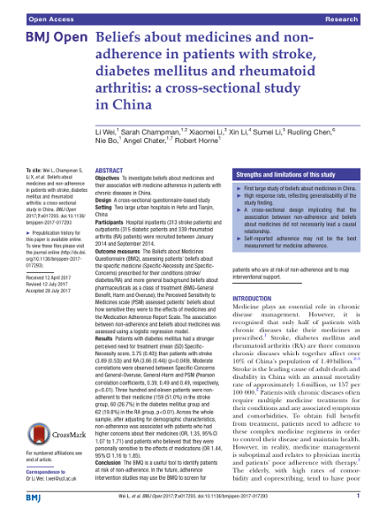 © 2017 author(s). Objectives To investigate beliefs about medicines and their association with medicine adherence in patients with chronic diseases in China. Design A cross-sectional questionnaire-based study Setting Two large urban hospitals in Hefei and Tianjin, China Participants Hospital inpatients (313 stroke patients) and outpatients (315 diabetic patients and 339 rheumatoid arthritis (RA) patients) were recruited between January 2014 and September 2014. Outcome measures The Beliefs about Medicines Questionnaire (BMQ), assessing patients' beliefs about the specific medicine (Specific-Necessity and Specific-Concerns) prescribed for their conditions (stroke/diabetes/RA) and more general background beliefs about pharmaceuticals as a class of treatment (BMQ-General Benefit, Harm and Overuse); the Perceived Sensitivity to Medicines scale (PSM) assessed patients' beliefs about how sensitive they were to the effects of medicines and the Medication Adherence Report Scale. The association between non-adherence and beliefs about medicines was assessed using a logistic regression model. Results Patients with diabetes mellitus had a stronger perceived need for treatment (mean (SD) Specific-Necessity score, 3.75 (0.40)) than patients with stroke (3.69 (0.53)) and RA (3.66 (0.44)) (p=0.049). Moderate correlations were observed between Specific-Concerns and General-Overuse, General-Harm and PSM (Pearson correlation coefficients, 0.39, 0.49 and 0.49, respectively, p<0.01). Three hundred and eleven patients were non-adherent to their medicine (159 (51.0%) in the stroke group, 60 (26.7%) in the diabetes mellitus group and 62 (19.8%) in the RA group, p<0.01). Across the whole sample, after adjusting for demographic characteristics, non-adherence was associated with patients who had higher concerns about their medicines (OR, 1.35, 95% CI 1.07 to 1.71) and patients who believed that they were personally sensitive to the effects of medications (OR 1.44, 95% CI 1.16 to 1.85). Conclusion The BMQ is a useful tool to identify patients at risk of non-adherence. In the future, adherence intervention studies may use the BMQ to screen for patients who are at risk of non-adherence and to map interventional support.

© 2020 The Authors. Published by BMJ Publishing Group. This is an open access article available under a Creative Commons licence. The published version can be accessed at the following link on the publisher’s website: https://doi.org/10.1136/bmjopen-2017-017293

This study was funded by the Research Innovation Fund, UCL School of Pharmacy. The funder had no role in the design, conduct or data interpretation of the study. Professor Rob Horne was supported by the National Institute for Health Research (NIHR) Collaboration for Leadership in Applied Health Research and Care (CLAHRC) North Thames at Bart’s Health NHS Trust.
ae974a485f413a2113503eed53cd6c53
10.1136/bmjopen-2017-017293