Effectiveness of an agricultural technology research and development project for increasing sustainability of cropping systems in upland areas of Yunnan Province, China 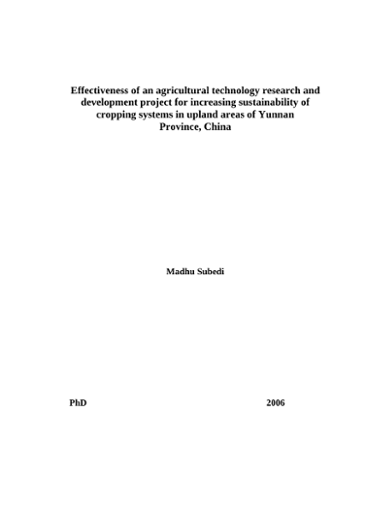 Continued increase in population and escalating environmental degradation have changed the priorities of agricultural development projects in developing and emerging countries towards both increasing production or productivity and improving sustainability. The long-term success of these development projects, especially in terms of improving sustainability, depends on how widely those improved practices which are shown to be effective in achieving the technical objectives, are adopted/adapted by farmers in the targeted region. In these terms, many projects in recent years may be considered to be relatively unsuccessful. This study aimed to investigate the factors contributing to the effectiveness of agricultural technology research and development projects in improving the sustainability of cropping systems in upland areas of China, together with the factors that might limit their effectiveness. This has involved both a review of recent projects carried out in the region and detailed monitoring and evaluation of one such project carried out in South West China – the SHASEA project. The SHASEA Project was implemented in Wang Jia catchment in Yunnan Province using holistic and multi-disciplinary approaches to address the twin objectives of increasing productivity of maize, wheat and soybean in a more sustainable and environmentally-friendly way. It introduced into the catchment a range of novel or modified cropping practices, which had been evaluated in plot studies over the preceding six years, together with biological and engineering measures designed to stabilise large scale soil movements in lateral gullies and the main stream. The SHASEA Project was successful in achieving its short-term scientific and technical objectives, but was too short to determine the level of adoption by farmers in the locality. The present study has used a range of approaches to evaluate the effectiveness of this Project, to monitor the biological, environmental and socio-economic impacts and investigate the perceptions of the farmers about the Project and the likelihood of their adoption of the recommended practices. Participatory approaches were used wherever possible, including detailed household surveys, PRA workshops and discussions with Key Informants. Field surveys and direct observations were also made, together with a limited economic analysis of the modified cropping practices introduced into the catchment. It was found that the farmers had different perceptions about the range of practices introduced into the catchment. Some were clearly preferred, such as contour cultivation and were likely to be adopted, while others were seen as inappropriate, such as straw mulching and intercropping, and were unlikely to be adopted. The benefits of an innovative, integrated cropping system, INCOPLAST, were not fully appreciated by the farmers. Other practices would only be adopted if the financial returns were favourable, such as the use of polythene mulch. Longer-term measures, such as tree planting schemes, were regarded favourably, but adoption would still depend on economic returns and related issues such as land security. An irrigation scheme was suggested by the farmers, but after installation it was not used extensively for the staple crops in the catchment. It was found that farmers planned to use the irrigation for higher value crops such as tobacco, after the end of the Project. It has been concluded that, despite the technical and scientific success of the Project, long-term adoption of many of the practices introduced into the catchment will be low, unless considerable incentives are used or much more effective dissemination techniques employed. It is considered that the outcomes would have improved considerably if participatory approaches had been used from the outset, to engage farmers more fully with the project, to ensure that the practices introduced were as appropriate as possible, to achieve greater ownership of the objectives and outcomes, leading to higher adoption rates. More emphasis should have been given to the dissemination of the outcomes at farmer level outside the catchment of study and there should have been more involvement with the regional policy makers and extension officials throughout the programme. Longer-term improvements in sustainability at the catchment level have not yet been demonstrated. These outcomes are discussed within the context of other agricultural projects carried out in South East Asia and other developing regions. Based on the outcomes and conclusions from this study, a series of recommendations are made which are presented as good practices for future agricultural development projects in South East Asia.