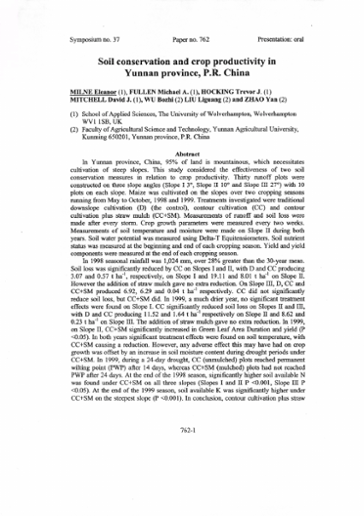 In Yunnan province, China, 95% of land is mountainous, which necessitates cultivation of steep slopes. This study considered the effectiveness of two soil conservation measures in relation to crop productivity. Thirty runoff plots were constructed on three slope angles (Slope I 3°, Slope II 10°and Slope III 27°) with 10 plots on each slope. Maize was cultivated on the slopes over two cropping seasons running from May to October, 1998 and 1999. Treatments investigated were traditional downslope cultivation (D) (the control), contour cultivation (CC) and contour cultivation plus straw mulch (CC+SM). Measurements of runoff and soil loss were made after every storm. Crop growth parameters were measured every two weeks. Measurements of soil temperature and moisture were made on Slope II during both years. Soil water potential was measured using Delta-T Equitensiometers. soil nutrient status was measured at the beginning and the end of each cropping season. Yield and yield components were measured at the end of each cropping season. In 1998 seasonal rainfall was 1,024 mm, over 28% greater than the 30-year mean. Soil loss was significantly reduced by CC on Slopes I and II with D and CC producing 3.07 and 0.57 t ha-1, respectively, on Slope I and 19.11 and 8.01 t ha-1 on Slope II. However, the addition of straw mulch gave no extra reduction. On Slope III, D, CC and CC+SM produced 6.92, 6.29 and 0.04 t ha-1, respectively. CC did not significantly reduce soil loss, but CC+SM did. In 1999, a much drier year, no significant treatment effects were found on Slope I. CC significantly reduced soil loss on Slopes II and III, with D and CC producing 11.52 and 1.64 t ha-1 respectively on Slope II and 8.62 and 0.23 t ha-1 on Slope III. The addition of straw mulch gave no extra reduction. In 1999, on Slope II, CC+SM significantly increased in Green Leaf Area Duration and yield (P<0.05). In both years significant treatment effects were found on soil temperature, with CC+SM causing a reduction. However, any adverse effect this may have had on crop growth was offset by an increase in soil moisture content during drought periods under CC+SM. In 1999, during a 24-day drought, CC (unmulched) plots reached permanent wilting point (PWP) after 14 days, wheras CC+SM (mulched) plots had not reached PWP after 24 days. At the end of the 1998 season, significantly higher soil available N was found under CC+SM on all three slopes (Slopes I and II P <0.001, Slope III P <0.05). At the end of the 1999 season, soil available K was significantly higher under CC+SM on the steepest slope (P<0.001). In conclusion, contour cultivation plus straw mulch can both reduce soil erosion and increase maize-productivity in the prevailing agro-environmental conditions in Yunnan.