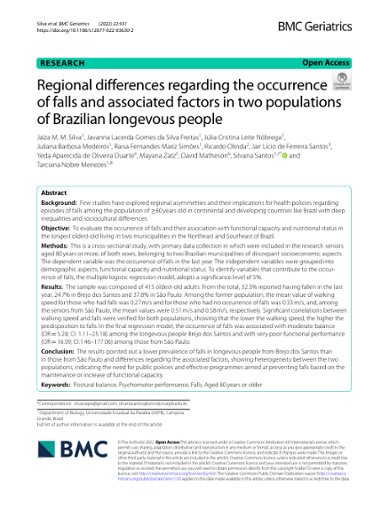 Background Few studies have explored regional asymmetries and their implications for health policies regarding episodes of falls among the population of ≥80 years old in continental and developing countries like Brazil with deep inequalities and sociocultural differences. Objective To evaluate the occurrence of falls and their association with functional capacity and nutritional status in the longest oldest-old living in two municipalities in the Northeast and Southeast of Brazil. Methods This is a cross-sectional study, with primary data collection in which were included in the research seniors aged 80 years or more, of both sexes, belonging to two Brazilian municipalities of discrepant socioeconomic aspects. The dependent variable was the occurrence of falls in the last year. The independent variables were grouped into demographic aspects, functional capacity and nutritional status. To identify variables that contribute to the occurrence of falls, the multiple logistic regression model, adopts a significance level of 5%. Results The sample was composed of 415 oldest-old adults. From the total, 32.3% reported having fallen in the last year, 24.7% in Brejo dos Santos and 37.8% in São Paulo. Among the former population, the mean value of walking speed for those who had falls was 0.27 m/s and for those who had no occurrence of falls was 0.33 m/s; and, among the seniors from São Paulo, the mean values were 0.51 m/s and 0.58 m/s, respectively. Significant correlations between walking speed and falls were verified for both populations, showing that the lower the walking speed, the higher the predisposition to falls. In the final regression model, the occurrence of falls was associated with moderate balance (OR = 5.28; CI: 1.11–25.18) among the longevous people Brejo dos Santos and with very poor functional performance (OR = 16.09; CI:1.46–177.06) among those from São Paulo. Conclusion The results pointed out a lower prevalence of falls in longevous people from Brejo dos Santos than in those from São Paulo and differences regarding the associated factors, showing heterogeneity between the two populations; indicating the need for public policies and effective programmes aimed at preventing falls based on the maintenance or increase of functional capacity.