What is the physiological impact of reducing the 2,000 m Olympic distance in rowing to 1,500 m and 1,000 m for French young competitive rowers? Insights from the energy system contribution 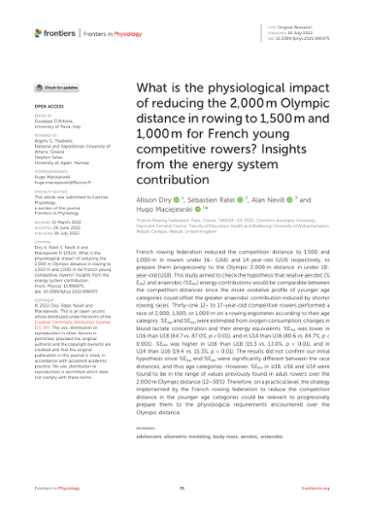 French rowing federation reduced the competition distance to 1,500 and 1,000 m in rowers under 16- (U16) and 14-year-old (U14) respectively, to prepare them progressively to the Olympic 2,000 m distance in under 18-year-old (U18). This study aimed to check the hypothesis that relative aerobic (%EAe) and anaerobic (%EAn) energy contributions would be comparable between the competition distances since the more oxidative profile of younger age categories could offset the greater anaerobic contribution induced by shorter rowing races. Thirty-one 12- to 17-year-old competitive rowers performed a race of 2,000, 1,500, or 1,000 m on a rowing ergometer according to their age category. %EAe and %EAn were estimated from oxygen consumption, changes in blood lactate concentration and their energy equivalents. %EAe was lower in U16 than U18 (84.7 vs. 87.0%, p < 0.01), and in U14 than U16 (80.6 vs. 84.7%, p < 0.001). %EAn was higher in U16 than U18 (15.3 vs. 13.0%, p < 0.01), and in U14 than U16 (19.4 vs. 15.3%, p < 0.01). The results did not confirm our initial hypothesis since %EAe and %EAn were significantly different between the race distances, and thus age categories. However, %EAn in U18, U16 and U14 were found to be in the range of values previously found in adult rowers over the 2,000 m Olympic distance (12–30%). Therefore, on a practical level, the strategy implemented by the French rowing federation to reduce the competition distance in the younger age categories could be relevant to progressively prepare them to the physiological requirements encountered over the Olympic distance.

© 2022 The Authors. Published by Frontiers Media. This is an open access article available under a Creative Commons licence. The published version can be accessed at the following link on the publisher’s website: https://doi.org/10.3389/fphys.2022.896975