The dietary practices and beliefs of British South Asian people living with inflammatory bowel disease: a multicenter study from the United Kingdom 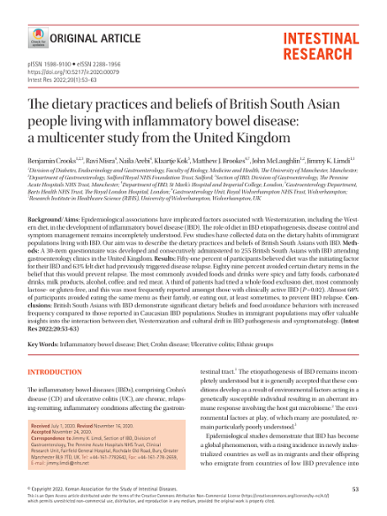 Background/Aims: Epidemiological associations have implicated factors associated with Westernization, including the Western diet, in the development of inflammatory bowel disease (IBD). The role of diet in IBD etiopathogenesis, disease control and symptom management remains incompletely understood. Few studies have collected data on the dietary habits of immigrant populations living with IBD. Our aim was to describe the dietary practices and beliefs of British South Asians with IBD. Methods: A 30-item questionnaire was developed and consecutively administered to 255 British South Asians with IBD attending gastroenterology clinics in the United Kingdom. Results: Fifty-one percent of participants believed diet was the initiating factor for their IBD and 63% felt diet had previously triggered disease relapse. Eighty-nine percent avoided certain dietary items in the belief that this would prevent relapse. The most commonly avoided foods and drinks were spicy and fatty foods, carbonated drinks, milk products, alcohol, coffee, and red meat. A third of patients had tried a whole food exclusion diet, most commonly lactose or gluten-free, and this was most frequently reported amongst those with clinically active IBD (P=0.02). Almost 60% of participants avoided eating the same menu as their family, or eating out, at least sometimes, to prevent IBD relapse. Conclusions: British South Asians with IBD demonstrate significant dietary beliefs and food avoidance behaviors with increased frequency compared to those reported in Caucasian IBD populations. Studies in immigrant populations may offer valuable insights into the interaction between diet, Westernization and cultural drift in IBD pathogenesis and symptomatology.

Korean Association for the Study of Intestinal Diseases

© 2022 Korean Association for the Study of Intestinal Diseases. This is an open access article available under a Creative Commons licence. The published version can be accessed at the following link on the publisher’s website: https://doi.org/10.5217/ir.2020.00079