Prevention and control of mosquito-borne arboviral diseases: lessons learned from a school-based intervention in Brazil (Zikamob) 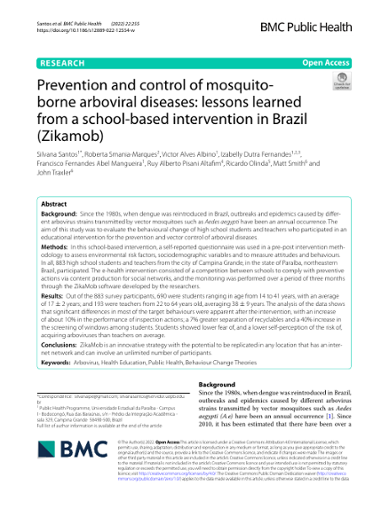 Background: Since the 1980s, when dengue was reintroduced in Brazil, outbreaks and epidemics caused by different arbovirus strains transmitted by vector mosquitoes such as Aedes aegypti have been an annual occurrence. The aim of this study was to evaluate the behavioural change of high school students and teachers who participated in an educational intervention for the prevention and vector control of arboviral diseases. Methods: In this school-based intervention, a self-reported questionnaire was used in a pre-post intervention methodology to assess environmental risk factors, sociodemographic variables and to measure attitudes and behaviours. In all, 883 high school students and teachers from the city of Campina Grande, in the state of Paraíba, northeastern Brazil, participated. The e-health intervention consisted of a competition between schools to comply with preventive actions via content production for social networks, and the monitoring was performed over a period of three months through the ZikaMob software developed by the researchers. Results: Out of the 883 survey participants, 690 were students ranging in age from 14 to 41 years, with an average of 17 ± 2 years; and 193 were teachers from 22 to 64 years old, averaging 38 ± 9 years. The analysis of the data shows that significant differences in most of the target behaviours were apparent after the intervention, with an increase of about 10% in the performance of inspection actions; a 7% greater separation of recyclables and a 40% increase in the screening of windows among students. Students showed lower fear of, and a lower self-perception of the risk of, acquiring arboviruses than teachers on average. Conclusions: ZikaMob is an innovative strategy with the potential to be replicated in any location that has an internet network and can involve an unlimited number of participants.

© 2022 The Authors. Published by BMC. This is an open access article available under a Creative Commons licence. The published version can be accessed at the following link on the publisher’s website: https://doi.org/10.1186/s12889-022-12554-w