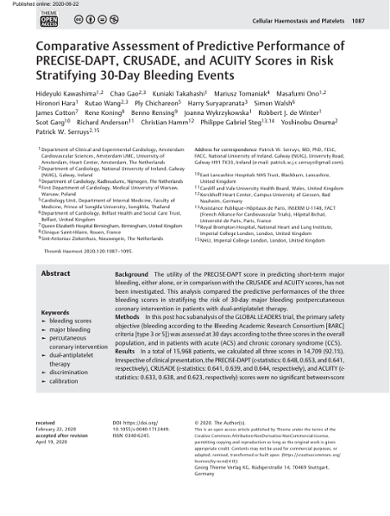 Background The utility of the PRECISE-DAPT score in predicting short-term major bleeding, either alone, or in comparison with the CRUSADE and ACUITY scores, has not been investigated. This analysis compared the predictive performances of the three bleeding scores in stratifying the risk of 30-day major bleeding postpercutaneous coronary intervention in patients with dual-antiplatelet therapy. Methods In this post hoc subanalysis of the GLOBAL LEADERS trial, the primary safety objective (bleeding according to the Bleeding Academic Research Consortium [BARC] criteria [type 3 or 5]) was assessed at 30 days according to the three scores in the overall population, and in patients with acute (ACS) and chronic coronary syndrome (CCS). Results In a total of 15,968 patients, we calculated all three scores in 14,709 (92.1%). Irrespective of clinical presentation, the PRECISE-DAPT (c-statistics: 0.648, 0.653, and 0.641, respectively), CRUSADE (c-statistics: 0.641, 0.639, and 0.644, respectively), and ACUITY (c-statistics: 0.633, 0.638, and 0.623, respectively) scores were no significant between-score differences in discriminatory performance for BARC 3 or 5 bleeding up to 30 days, and similarly the PRECISE-DAPT score had a comparable discriminative capacity according to the integrated discrimination improvement when compared with the other scores. In ACS, the CRUSADE score had a poor calibration ability (Hosmer-Lemeshow goodness-of-fit [GOF] chi-square = 15.561, p = 0.049), whereas in CCS, the PRECISE-DAPT score had poor calibration (GOF chi-square = 15.758, p = 0.046). Conclusion The PRECISE-DAPT score might be clinically useful in the overall population and ACS patients for the prediction of short-term major bleeding considering its discriminative and calibration abilities.

© 2020 The Authors. Published by Georg Thieme Verlag. This is an open access article available under a Creative Commons licence. The published version can be accessed at the following link on the publisher’s website: https://www.thieme-connect.de/products/ejournals/html/10.1055/s-0040-1712449

Except where otherwise noted, this item's license is described as Licence for published version: Creative Commons Attribution-NonCommercial-NoDerivatives 4.0 International