All you need to know about sperm RNAs 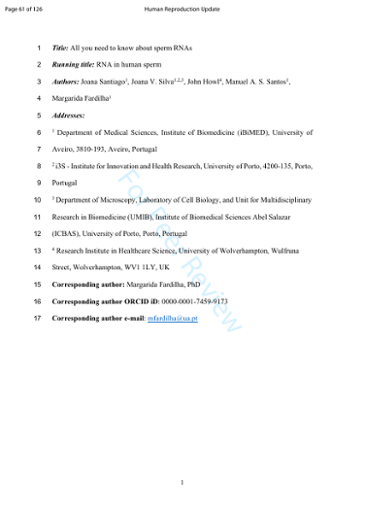 Background: Spermatogenesis generates a small and highly specialized type of cell that is apparently incapable of transcription and translation. For many years, this dogma was supported by the assumption that (i) the compact sperm nucleus, resulting from the substitution of histones by protamine during spermatogenesis, renders the genome inaccessible to the transcriptional machinery; and (ii) the loss of most organelles, including endoplasmic reticulum and ribosomes, limits or prevents translational activity. Despite these observations, several types of coding and non-coding RNAs have been identified in human sperm. Their functional roles, particularly during fertilization and embryonic development, are only now becoming apparent. Objective and rationale: This review aimed to summarize current knowledge of the origin, types, and functional roles of sperm RNAs, and to evaluate the clinical benefits of employing these transcripts as biomarkers of male fertility and reproductive outcomes. The possible contribution of sperm RNAs to both intergenerational and transgenerational phenotypic inheritance is also addressed. Search methods: A comprehensive literature search on PubMed was conducted using the search terms ‘sperm’ AND ‘RNA’. Searches focussed upon articles written in English and published prior to August 2020. Outcomes: The development of more sensitive and accurate RNA technologies, including RNA-seq, has enabled the identification and characterization of numerous transcripts in human sperm. Though a majority of these RNAs likely arise during spermatogenesis, other data support an epididymal origin of RNA transmitted to maturing sperm by extracellular vesicles. A minority may also be synthesized by de novo transcription in mature sperm, since a small portion of the sperm genome remains packed by histones. This complex RNA population has important roles in paternal chromatin packaging, sperm maturation and capacitation, fertilization, early embryogenesis, and developmental maintenance. In recent years, additional lines of evidence from animal models support a role for sperm RNAs in intergenerational and transgenerational inheritance, modulating both the genotype and phenotype of progeny. Importantly, several reports indicate that the sperm RNA content of fertile and infertile men differs considerably, and is strongly modulated by the environment, lifestyle, and pathological states. Wider implications: Transcriptional profiling has considerable potential for the discovery of fertility biomarkers. Understanding the role of sperm transcripts and comparing the sperm RNA fingerprint of fertile and infertile men could help to elucidate the regulatory pathways contributing to male factor infertility. Such data might also provide a molecular explanation for several causes of idiopathic male fertility. Ultimately, transcriptional profiling may be employed to optimize ART procedures and overcome some of the underlying causes of male infertility, ensuring the birth of healthy children

This is an accepted manuscript of an article published by Oxford University Press in Human Reproduction Update on 8/10/2021, available online at: https://doi.org/10.1093/humupd/dmab034 The accepted version of the publication may differ from the final published version.