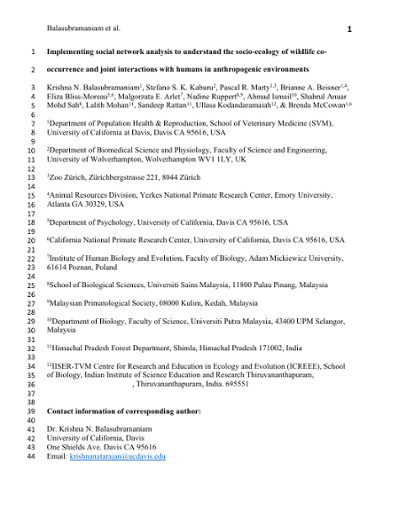 Human population expansion into wildlife habitats has increased interest in the behavioural ecology of human-wildlife interactions. To date, however, the socio-ecological factors that determine whether, when or where wild animals take risks by interacting with humans and anthropogenic factors still remains unclear. 2.We adopt a comparative approach to address this gap, using social network analysis (SNA). SNA, increasingly implemented to determine human impact on wildlife ecology, can be a powerful tool to understand how animal socioecology influences the spatiotemporal distribution of human-wildlife interactions. 3.For 10 groups of rhesus, long-tailed, and bonnet macaques (Macaca spp.) living in anthropogenically-impacted environments in Asia, we collected data on human-macaque interactions, animal demographics, and macaque-macaque agonistic and affiliative social interactions. We constructed ‘human co-interaction networks’ based on associations between macaques that interacted with humans within the same time and spatial locations, and social networks based on macaque-macaque allogrooming behaviour, affiliative behaviours of short duration (agonistic support, lip-smacking, silent bare-teeth displays, and non-sexual mounting), and proximity. 4.Pre-network permutation tests revealed that, within all macaque groups, specific individuals jointly took risks by repeatedly, consistently co-interacting with humans64within and across time and space. GLMMs revealed that macaques’ tendencies to co-interact with humans was positively predicted by their tendencies to engage in short-duration affiliative interactions and tolerance of conspecifics, although the latter varied across species (bonnets>rhesus>long-tailed). Male macaques were more likely to co-interact with humans than females. Neither macaques’ grooming relationships nor their dominance ranks predicted their tendencies to co-interact with humans. 5.Our findings suggest that, in challenging anthropogenic environments, less (compared to more) time-consuming forms of affiliation, and additionally greater social tolerance in less ecologically flexible species with a shorter history of exposure to humans, may be key to animals’ joint propensities to take risks to gain access to resources. For males, greater exploratory tendencies and less energetically demanding long-term life-history strategies (compared to females), may also influence such joint risk-taking. From conservation and public health perspectives, wildlife connectedness within such co-interaction networks may inform interventions to mitigate zoonosis, and move human-wildlife interactions from conflict towards co-existence.

This is an accepted manuscript of an article published by Wiley in Journal of Animal Ecology on 28/08/2021, available online: https://doi.org/10.1111/1365-2656.13584 The accepted version of the publication may differ from the final published version.