Optimising frontline learning and engagement between consultant-led neonatal teams in the West Midlands: a survey on the utility of an augmented simulation training technique 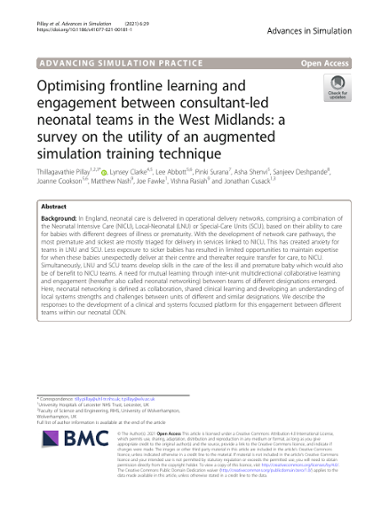 Background: In England neonatal care is delivered in operational delivery networks, comprising a combination of Neonatal Intensive Care(NICU), Local-Neonatal(LNU) or Special-Care Units (SCU), based on their ability to care for babies with different degrees of illness or prematurity. With the development of network care-pathways, the most premature and sickest are mostly triaged for delivery in services linked to NICU. This has created anxiety for teams in LNU and SCU. Less exposure to sicker babies has resulted in limited opportunities to maintain expertise for when these babies unexpectedly deliver at their centre and thereafter require transfer for care, to NICU. Simultaneously, LNU and SCU teams develop skills in care of the less ill and premature baby which would also be of benefit to NICU teams. A need for mutual learning through inter-unit multidirectional collaborative learning and engagement (hereafter also called neonatal networking) between teams of different designations emerged. Here neonatal networking is defined as collaboration, shared clinical learning and developing an understanding of local systems strengths and challenges between units of different and similar designations. We describe the responses to the development of a clinical and systems focused platform for this engagement between different teams within our neonatal ODN. Method: An interactive one-day programme was developed in the West Midlands, focusing on a non-hierarchical, equal partnership between neonatal teams from different unit designations. It utilised simulation around clinical scenarios, with a slant towards consultant engagement. Four groups rotating through four clinical simulation scenarios were developed. Each group participated in a clinical simulation scenario, led by a consultant and supported by nurses and doctors in training together with facilitators, with a further ~two consultants, as observers within the group. All were considered learners. Consultant candidates took turns to be participants and observers in the simulation scenarios so that at the end of the day all had led a scenario. Each simulation-clinical debrief session was lengthened by a further ~ 20 minutes, during which free style discussion with all learners occurred. This was to promote further bonding, through multidirectional sharing, and with a systems focus around understanding strengths and challenges of practices in different units. A consultant-focus was adopted to promote long-term engagement between units around shared care. There were four time points for this neonatal networking during the course of the day. Qualitative assessment and a Likert scale were used to assess this initiative over 4 years. Results: 155 individuals involved in frontline neonatal care participated. 77 were consultants, supported by neonatal trainees, staff grade doctors, clinical fellows, advanced neonatal nurse practitioners and nurses in training. All were invited to participate in the survey. The survey response rate was 80.6%. 79% felt that this learning strategy was highly relevant; 96% agreed that for consultants this was appropriate adult learning. 98% agreed that consultant training encompassed more than bedside clinical management, including forging communication links between teams. Thematic responses suggested that this was a highly useful method for multi-directional learning around shared care between neonatal unit. Conclusion: Simulation, enhanced with systems focused debrief, appeared to be an acceptable method of promoting multidirectional learning within neonatal teams of differing designations within the WMNODN.

© The Authors. Published by BMC (Springer). This is an open access article available under a Creative Commons licence. The published version can be accessed at the following link on the publisher’s website: https://doi.org/10.1186/s41077-021-00181-1