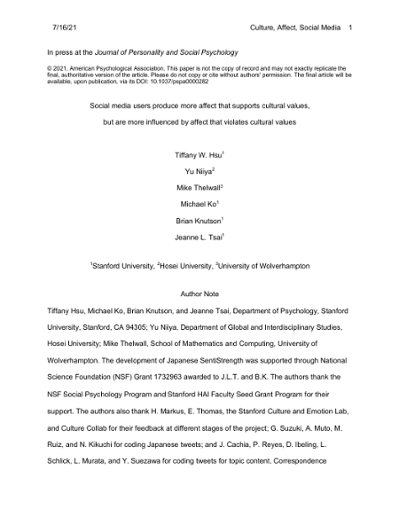 Although social media plays an increasingly important role in communication around the world, social media research has primarily focused on Western users. Thus, little is known about how cultural values shape social media behavior. To examine how cultural affective values might influence social media use, we developed a new sentiment analysis tool that allowed us to compare the affective content of Twitter posts in the United States (55,867 tweets, 1888 users) and Japan (63,863 tweets, 1825 users). Consistent with their respective cultural affective values, U.S. users primarily produced positive (vs. negative) posts, while Japanese users primarily produced low (vs. high) arousal posts. Contrary to cultural affective values, however, U.S. users were more influenced by changes in others’ high arousal negative (e.g., angry) posts, whereas Japanese were more influenced by changes in others’ high arousal positive (e.g., excited) posts. These patterns held after controlling for differences in baseline exposure to affective content, and across different topics. Together, these results suggest that across cultures, while social media users primarily produce content that supports their affective values, they are more influenced by content that violates those values. These findings have implications for theories about which affective content spreads on social media, and for applications related to the optimal design and use of social media platforms around the world.

Journal of Personality and Social Psychology

This is an accepted manuscript of an article published by American Psychological Association in Journal of Personality and Social Psychology, available online at: https://doi.org/10.1037/pspa0000282 The accepted version of the publication may differ from the final published version.