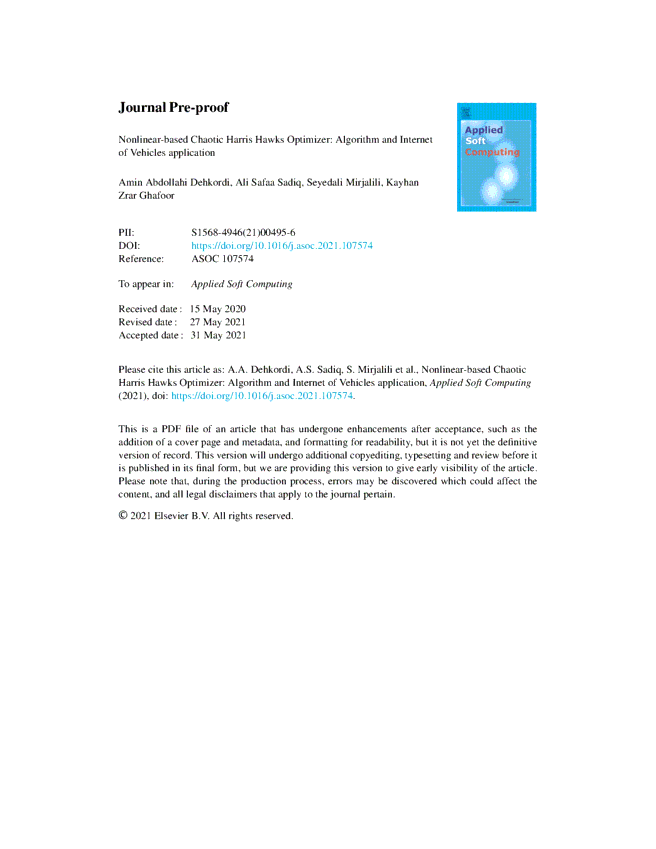 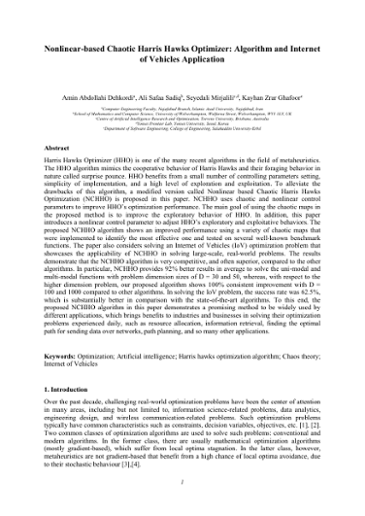 Harris Hawks Optimizer (HHO) is one of the many recent algorithms in the field of metaheuristics. The HHO algorithm mimics the cooperative behavior of Harris Hawks and their foraging behavior in nature called surprise pounce. HHO benefits from a small number of controlling parameters setting, simplicity of implementation, and a high level of exploration and exploitation. To alleviate the drawbacks of this algorithm, a modified version called Nonlinear based Chaotic Harris Hawks Optimization (NCHHO) is proposed in this paper. NCHHO uses chaotic and nonlinear control parameters to improve HHO’s optimization performance. The main goal of using the chaotic maps in the proposed method is to improve the exploratory behavior of HHO. In addition, this paper introduces a nonlinear control parameter to adjust HHO’s exploratory and exploitative behaviors. The proposed NCHHO algorithm shows an improved performance using a variety of chaotic maps that were implemented to identify the most effective one and tested on several well-known benchmark functions. The paper also considers solving an Internet of Vehicles (IoV) optimization problem that showcases the applicability of NCHHO in solving large-scale, real-world problems. The results demonstrate that the NCHHO algorithm is very competitive, and often superior, compared to the other algorithms. In particular, NCHHO provides 92% better results in average to solve the uni-modal and multi-modal functions with problem dimension sizes of D = 30 and 50, whereas, with respect to the higher dimension problem, our proposed algorithm shows 100% consistent improvement with D = 100 and 1000 compared to other algorithms. In solving the IoV problem, the success rate was 62.5%, which is substantially better in comparison with the state-of-the-art algorithms. To this end, the proposed NCHHO algorithm in this paper demonstrates a promising method to be widely used by different applications, which brings benefits to industries and businesses in solving their optimization problems experienced daily, such as resource allocation, information retrieval, finding the optimal path for sending data over networks, path planning, and so many other applications.

This is an accepted manuscript of an article published by Elsevier in Applied Soft Computing on 5 June 2021, available online at: https://doi.org/10.1016/j.asoc.2021.107574 The accepted version of the publication may differ from the final published version.