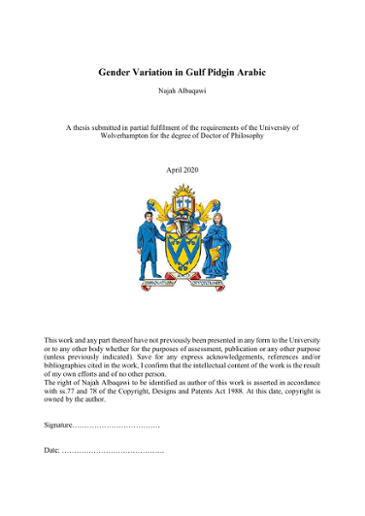 In the history of pidgins and creoles, many documented contact languages are European-based ones because they arose as a direct result of European colonial expansion between the sixteenth century and the first half of the twentieth century. However, contact languages are developing entirely outside the European context as a result of ongoing international migration and economic integration created by globalisation. One such newly emerging pidgin is known as Gulf Pidgin Arabic (GPA). This unique linguistic phenomenon is a simplified contact variety of the Arabic language used in the Gulf States for communication between native Arabic speakers and foreign workers, as well as among the workers themselves. Pidgin languages have not been studied until relatively recently, since the middle of the last century. Similarly, GPA has received relatively little attention in the literature, apart from a few descriptive works such as Abed (2017), Almoaily (2012), Avram (2014), Næss (2008), Smart (1990), and Wiswal (2002). Importantly, there is an increasing labour market demand for women migrants in the Gulf, and this demand is often more stable than that for men; however, no studies to date have investigated the gender and language variation in Gulf countries conditioned by length of stay or substrate language. To carry out this research, an integrated research design, combining quantitative and qualitative phases of analysis, is employed to examine data drawn from one-to-one semi-structured interviews. Extensive background research on the Saudi social setting, the Pidgin languages, Gulf Arabic (GA) and GPA, and the major substrate languages of GPA is undertaken to investigate the sociolinguistic and linguistic situations that have resulted in the emergence of GPA. I analyse the influence of the first language of female GPA speakers and the number of years spent in the Gulf as potential factors conditioning language and gender variation in GPA. The dataset for the study consists of interviews with 72 informants from six linguistic backgrounds: Malayalam, Punjabi, Bengali, Tagalog, Sinhala, and Sunda. Interviews were conducted in Riyadh, the capital city of Saudi Arabia. Half of the informants had spent five years or less in the Gulf, while the other half had spent 10 years or more in the area at the time of interview. The analysis is based on 10 morphosyntactic phenomena: free or bound object or possessive pronoun, presence or absence of the Arabic definiteness marker, presence or absence of Arabic conjunction markers, presence or absence of the GPA copula, and presence or absence of agreement in the verb phrase and the noun phrase. Regarding the informants’ choice of the studied morphosyntactic features, the results of this thesis demonstrate that the length of stay in the Gulf produces more accommodation to standard GA in women than men. However, this shift was significant for only one feature: conjunction markers. For the influence of the first language, a significant adaptation to the system of GA (the lexifier language) was found for two features: conjunction markers and nominal agreement. Furthermore, with years of stay in the Gulf, there was a significant shift for only two features: conjunction markers and definiteness. This finding could be taken to support both universalist theories and substrate theory of the emergence of contact languages. The two theories seem to have effects on the emergence of pidgins and creoles; it is worth noting that neither are separate from each other, and they can be complementary. Thus, my data supports Mufwene’s (1993) complementary theory of genesis, which claims that universal as well as substratal factors can contribute to the emergence of contact languages.