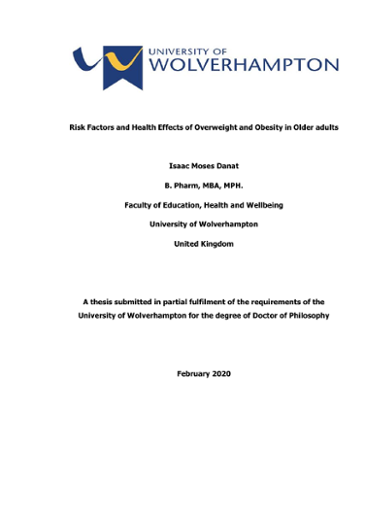 Introduction: The older adult population is rapidly increasing, and overweight and obesity prevalence is fast rising in older people globally. It is unclear whether excess body weight in older age reduces or increases the risk of incident dementia and whether it prolongs survival. Evidence of the risk factors for overweight and obesity in older age is scarce. This thesis investigated the risk factors and health effects of overweight and obesity in older age, with a focus on their impacts on incident dementia and all-cause mortality. Methodology: This study employed a mixed method of quantitative and qualitative approaches that are based on a large cohort study dataset from China and two focus group discussions from the United Kingdom. The cohort consisted of 3,336 participants in total: 1,736 aged >= 65 years recruited from urban areas in 2001 and 1,600 aged>=60 years from rural areas in 2003 in Anhui province, China. In the standard methods of interview, they were documented for sociodemographic, lifestyle, social network, disease, and other risk factors at the baseline survey. Body Mass Index (BMI) and waist circumference (WC) were measured, and dementia was diagnosed by the GMS-AGECAT for each of the participants. The cohort members were followed up for 10 years to monitor mortality and examine the cause of death. There were three waves of interview for surviving cohort members during the follow up to document incident dementia apart from the causes of mortality. The data of the Anhui cohort study were analysed in multivariate Logistic and Cox regression models. Two focus groups research were conducted in Wolverhampton UK. It included 12 twelve older adults who were recruited from the community through their place of worship. The focus group data were collected in a digital audiotape. They were transcribed verbatim and analysed thematically. Findings: The data from the cohort wave three surveys showed that the risk factors for overweight and obesity in older people included female gender, low education, low income, residing in urban areas, being married, watching TV/reading newspapers, and hypertension at baseline. Over the 10-year follow-up, 271 participants were diagnosed as having incident dementia. The continuous BMI at baseline increased the risk of incident dementia (multivariate-adjusted odds ratio (OR) 1.06, 95%CI 1.00-1.11). There was no significant increase in OR in participants who were overweight (1.34, 0.91-1.98) and obese (1.52, 0.86-2.70) when compared to normal weight, but separate data by gender showed that dementia risk was significantly increased in men with overweight (3.09, 1.65-5.77) and obesity (4.19, 1.75-10.03) and not in women (0.74, 0.43-1.27; 0.72, 0.32-1.64). The prediction was similar regardless of different adiposity measures used; the risk of dementia was elevated in non-smokers with obesity measured by BMI (4.28, 1.46-12.53) and in non-smokers with waist circumference classed as action level two (3.19, 1.04-9.77). The Anhui cohort data did not show significantly reduced mortality in older people with overweight (HR 0.78, 95%CI 0.56-1.08) and obese BMI (0.79, 0.47-1.33) when compared to normal BMI. There were no gender differences. But the risk of all-cause mortality was significantly increased in older people with underweight (2.04, 1.25-3.33), and the sex-stratified data analysis showed a stronger effect in men (2.31, 1.21-4.42) and not in women (1.59, 0.73-3.44). The focus group data also supported such findings of deleterious effects of overweight and obesity by major themes including theme-harm, impairment, and mortality. Conclusions: Overweight and obesity in older age increased the risk of incident dementia. They were not significantly associated with reduced risk of mortality although underweight increased the risk. Curtailing overweight and obesity and maintaining normal weight in older age could help reduce the risk of developing dementia and extend survival.