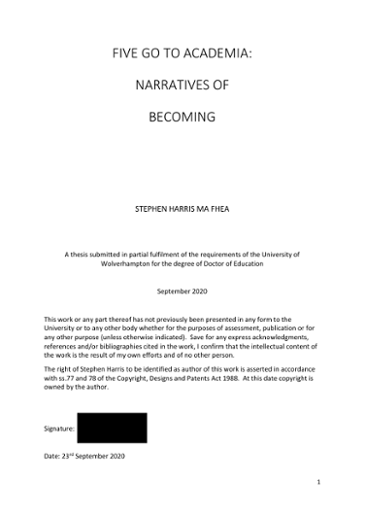 This autoethnographic inquiry aims to capture the complexity within the storied life history accounts of five academics, including my own, regarding the experiences they believe shaped the becoming of their workplace self. The individual stories are narrated, and then discussed collectively to encourage dialogue and deepen understanding. This inquiry is set against the context of previous research that focusses on the impact neoliberal policy and practice places upon the academic (Shore & Wright 2000; Morley, 2004; Harris, 2005; Billot, 2010; Floyd & Dimmock, 2011; Fanghanel, 2012). However, as a postmodern study, recognising ‘self’ as a transposable, contested and fluid entity it casts a wider lens to support this inquiry’s aim, and its two subordinate research outcomes. The first outcome is to inform my own academic and management practice by drawing on Bourdieu’s (1992; 1996) notion of capital and habitus. The second outcome is to develop and then test two multi-disciplinary conceptual frameworks that can be used, amended, or indeed discarded by self and identity researchers when meaning-making qualitative findings (Rainbow & Rose, 1994). The first of these frameworks draws mainly on the three broad categories of differing selves identified by Trede (2012), while the second returns to Bourdieu to consider his notion of ‘world hypothesis’, one that rejects dualisms (Bourdieu & Wacquant, 1992, p.11). The methodological strategy I use is informed primarily by both the five key features of analytic autoethnography (Anderson, 2006, pp.379-386) and Frank’s (2010, pp.105-110) six acts of dialogical narrative analysis preparation. I use four research questions to individually examine each storied transcript from different epistemic angles. The four questions, two aligned to each research outcome, seek out the socio-cultural power constructs that influence a participant’s temporal, synchronic and agentic understanding of the becoming of their academic self (Bamberg, 2011). Findings of the influences that shape academic self include, but are not limited to, parental expectations, life-history influences, immigration, race, gender, workplace experience outside of the university, as well as the impact of neoliberalism. These then inform recommendations that centre on the development of my own academic practice, as well as wider scholarly, and institutional ones.

A thesis submitted in partial fulfilment of the requirements of the University of Wolverhampton for the degree of Doctor of Education.