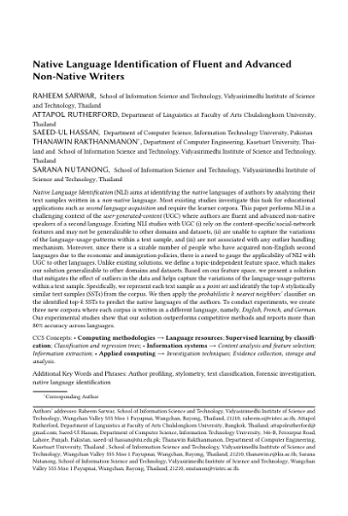 Native Language Identification (NLI) aims at identifying the native languages of authors by analyzing their text samples written in a non-native language. Most existing studies investigate this task for educational applications such as second language acquisition and require the learner corpora. This article performs NLI in a challenging context of the user-generated-content (UGC) where authors are fluent and advanced non-native speakers of a second language. Existing NLI studies with UGC (i) rely on the content-specific/social-network features and may not be generalizable to other domains and datasets, (ii) are unable to capture the variations of the language-usage-patterns within a text sample, and (iii) are not associated with any outlier handling mechanism. Moreover, since there is a sizable number of people who have acquired non-English second languages due to the economic and immigration policies, there is a need to gauge the applicability of NLI with UGC to other languages. Unlike existing solutions, we define a topic-independent feature space, which makes our solution generalizable to other domains and datasets. Based on our feature space, we present a solution that mitigates the effect of outliers in the data and helps capture the variations of the language-usage-patterns within a text sample. Specifically, we represent each text sample as a point set and identify the top-k stylistically similar text samples (SSTs) from the corpus. We then apply the probabilistic k nearest neighbors’ classifier on the identified top-k SSTs to predict the native languages of the authors. To conduct experiments, we create three new corpora where each corpus is written in a different language, namely, English, French, and German. Our experimental studies show that our solution outperforms competitive methods and reports more than 80% accuracy across languages.

This is an accepted manuscript of an article published by ACM in ACM Transactions on Asian and Low-Resource Language Information Processing in April 2020, available online: https://doi.org/10.1145/3383202 The accepted version of the publication may differ from the final published version.