Synergistic effects of vegetation layers of maize and potato intercropping on soil erosion on sloping land in Yunnan Province, China 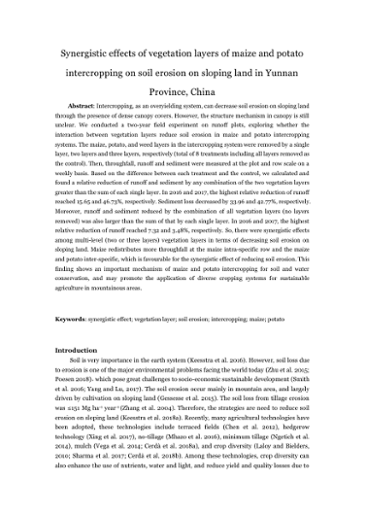 Intercropping, as an overyielding system, can decrease soil erosion on sloping land through the presence of dense canopy covers. However, the structure mechanism in canopy is still unclear. We conducted a two-year field experiment on runoff plots, exploring whether the interaction between vegetation layers reduce soil erosion in maize and potato intercropping systems. The maize, potato, and weed layers in the intercropping system were removed by a single layer, two layers and three layers, respectively (total of 8 treatments including all layers removed as the control). Then, throughfall, runoff and sediment were measured at the plot and row scale on a weekly basis. Based on the difference between each treatment and the control, we calculated and found a relative reduction of runoff and sediment by any combination of the two vegetation layers greater than the sum of each single layer. In 2016 and 2017, the highest relative reduction of runoff reached 15.65% and 46.73%, respectively. Sediment loss decreased by 33.96% and 42.77%, respectively. Moreover, runoff and sediment reduced by the combination of all vegetation layers (no layers removed) was also larger than the sum of that by each single layer. In 2016 and 2017, the highest relative reduction of runoff reached 7.32% and 3.48%, respectively. So, there were synergistic effects among multi-level (two or three layers) vegetation layers in terms of decreasing soil erosion on sloping land. Maize redistributes more throughfall at the maize intra-specific row and the maize and potato inter-specific, which is favorable for the synergistic effect of reducing soil erosion. This finding shows an important mechanism of maize and potato intercropping for soil and water conservation, and may promote the application of diverse cropping systems for sustainable agriculture in mountainous areas.

This is an accepted manuscript of an article published by Springer in Journal of Mountain Science on 04/03/2020, available online: https://doi.org/10.1007/s11629-019-5392-0 The accepted version of the publication may differ from the final published version.