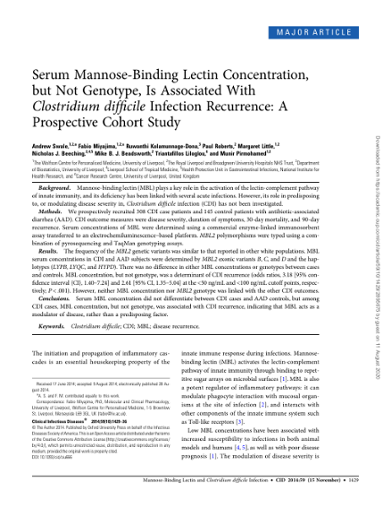 Low mannose-binding lectin concentration, but not genotype, was associated with disease recurrence in a large prospective cohort of patients with Clostridium difficile infection. Background. Mannose-binding lectin (MBL) plays a key role in the activation of the lectin-complement pathway of innate immunity, and its deficiency has been linked with several acute infections. However, its role in predisposing to, or modulating disease severity in, Clostridium difficile infection (CDI) has not been investigated. Methods. We prospectively recruited 308 CDI case patients and 145 control patients with antibiotic-associated diarrhea (AAD). CDI outcome measures were disease severity, duration of symptoms, 30-day mortality, and 90-day recurrence. Serum concentrations of MBL were determined using a commercial enzyme-linked immunosorbent assay transferred to an electrochemiluminescence–based platform. MBL2 polymorphisms were typed using a combination of pyrosequencing and TaqMan genotyping assays. Results. The frequency of the MBL2 genetic variants was similar to that reported in other white populations. MBL serum concentrations in CDI and AAD subjects were determined by MBL2 exonic variants B, C, and D and the haplotypes (LYPB, LYQC, and HYPD). There was no difference in either MBL concentrations or genotypes between cases and controls. MBL concentration, but not genotype, was a determinant of CDI recurrence (odds ratios, 3.18 [95% confidence interval {CI}, 1.40–7.24] and 2.61 [95% CI, 1.35–5.04] at the <50 ng/mL and <100 ng/mL cutoff points, respectively; P < .001). However, neither MBL concentration nor MBL2 genotype was linked with the other CDI outcomes. Conclusions. Serum MBL concentration did not differentiate between CDI cases and AAD controls, but among CDI cases, MBL concentration, but not genotype, was associated with CDI recurrence, indicating that MBL acts as a modulator of disease, rather than a predisposing factor.

© 2014 The Authors. Published by Oxford University Press. This is an open access article available under a Creative Commons licence. The published version can be accessed at the following link on the publisher’s website: https://doi.org/10.1093/cid/ciu666