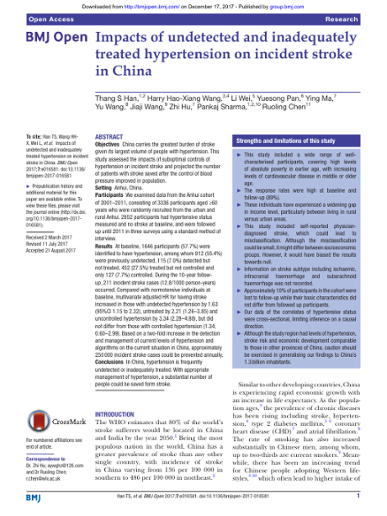 © Article author(s) 2017. Objectives China carries the greatest burden of stroke given its largest volume of people with hypertension. This study assessed the impacts of suboptimal controls of hypertension on incident stroke and projected the number of patients with stroke saved after the control of blood pressure improved in population. Setting Anhui, China. Participants We examined data from the Anhui cohort of 2001-2011, consisting of 3336 participants aged ≥60 years who were randomly recruited from the urban and rural Anhui. 2852 participants (89.2%) had hypertensive status measured and no stroke at baseline, and were followed up until 2011 in three surveys using a standard method of interview. Results At baseline, 1646 participants (57.7%) were identified to have hypertension, among whom 912 (55.4%) were previously undetected, 115 (7.0%) detected but not treated, 452 (27.5%) treated but not controlled and only 127 (7.7%) controlled. During the 10-year follow-up, 211 incident stroke cases (12.8/1000 person-years) occurred. Compared with normotensive individuals at baseline, multivariate adjusted HR for having stroke increased in those with undetected hypertension by 1.63 (95%CI 1.15 to 2.32), untreated by 2.21 (1.26-3.85) and uncontrolled hypertension by 3.34 (2.28-4.88), but did not differ from those with controlled hypertension (1.34; 0.60-2.99). Based on a two-fold increase in the detection and management of current levels of hypertension and algorithms on the current situation in China, approximately 250 000 incident stroke cases could be prevented annually. Conclusions In China, hypertension is frequently undetected or inadequately treated. With appropriate management of hypertension, a substantial number of people could be saved form stroke.

© 2017 The Authors. Published by BMJ Publishing Group. This is an open access article available under a Creative Commons licence. The published version can be accessed at the following link on the publisher’s website: https://doi.org/10.1136/bmjopen-2017-016581

The data collections at baseline and in the follow up of the cohort were funded by the Royal Society, Alzheimer’s Research and BUPA Foundation UK. RC would like to thank an undergraduate fellowship grant from King’s College London, UK to analyse the Anhui cohort data for stroke research.
ae974a485f413a2113503eed53cd6c53
10.1136/bmjopen-2017-016581