Compartment-specific immunity in the human gut: Properties and functions of dendritic cells in the colon versus the ileum 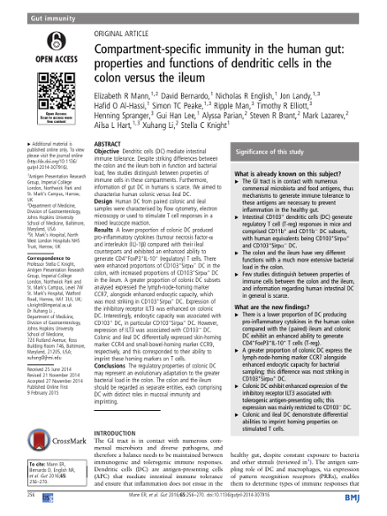 Objective Dendritic cells (DC) mediate intestinal immune tolerance. Despite striking differences between the colon and the ileum both in function and bacterial load, few studies distinguish between properties of immune cells in these compartments. Furthermore, information of gut DC in humans is scarce. We aimed to characterise human colonic versus ileal DC. Design Human DC from paired colonic and ileal samples were characterised by flow cytometry, electron microscopy or used to stimulate T cell responses in a mixed leucocyte reaction. Results A lower proportion of colonic DC produced pro-inflammatory cytokines (tumour necrosis factor-a and interleukin (IL)-1ß) compared with their ileal counterparts and exhibited an enhanced ability to generate CD4+FoxP3+IL-10+ (regulatory) T cells. There were enhanced proportions of CD103+Sirpa- DC in the colon, with increased proportions of CD103+Sirpa+ DC in the ileum. A greater proportion of colonic DC subsets analysed expressed the lymph-node-homing marker CCR7, alongside enhanced endocytic capacity, which was most striking in CD103+Sirpa+ DC. Expression of the inhibitory receptor ILT3 was enhanced on colonic DC. Interestingly, endocytic capacity was associated with CD103+ DC, in particular CD103+Sirpa+ DC. However, expression of ILT3 was associated with CD103- DC. Colonic and ileal DC differentially expressed skin-homing marker CCR4 and small-bowel-homing marker CCR9, respectively, and this corresponded to their ability to imprint these homing markers on T cells. Conclusions The regulatory properties of colonic DC may represent an evolutionary adaptation to the greater bacterial load in the colon. The colon and the ileum should be regarded as separate entities, each comprising DC with distinct roles in mucosal immunity and imprinting.

© 2015 The Authors. Published by BMJ. This is an open access article available under a Creative Commons licence. The published version can be accessed at the following link on the publisher’s website: http://dx.doi.org/10.1136/gutjnl-2014-307916

This research was funded by St. Mark's Foundation (Harrow, UK), The Biotechnology and Biological Sciences Research Council (BBSRC; BB/J004529/1) and The National Institutes of Health (NIH; US) including The National Institute of Diabetes and Digestive and Kidney Diseases (NIH/NIDDK; T32-DK07632 and P01-DK072084) and The National Institute of Allergy and Infectious Disease (NIH/NIAID; R21-AI094033). We also gratefully acknowledge funding support from The Harvey M. and Lyn P. Meyerhoff Inflammatory Bowel Disease Centre at The Johns Hopkins Hospital, Baltimore, US.
ae974a485f413a2113503eed53cd6c53
10.1136/gutjnl-2014-307916