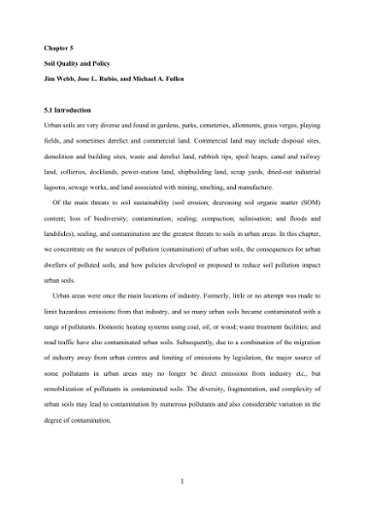 Urban soils are very diverse and found in gardens, parks, cemeteries, allotments, grass verges, playing fields, and sometimes derelict and commercial land. Commercial land may include disposal sites, demolition and building sites, waste and derelict land, rubbish tips, spoil heaps, canal and railway land, collieries, docklands, power-station land, shipbuilding land, scrap yards, dried-out industrial lagoons, sewage works, and land associated with mining, smelting, and manufacture. Of the main threats to soil sustainability (soil erosion; decreasing soil organic matter (SOM) content; loss of biodiversity; contamination; sealing; compaction; salinisation; and floods and landslides), sealing, and contamination are the greatest threats to soils in urban areas. In this chapter, we concentrate on the sources of pollution (contamination) of urban soils, the consequences for urban dwellers of polluted soils, and how policies developed or proposed to reduce soil pollution impact urban soils. Urban areas were once the main locations of industry. Formerly, little or no attempt was made to limit hazardous emissions from that industry, and so many urban soils became contaminated with a range of pollutants. Domestic heating systems using coal, oil, or wood; waste treatment facilities; and road traffic have also contaminated urban soils. Subsequently, due to a combination of the migration of industry away from urban centres and limiting of emissions by legislation, the major source of some pollutants in urban areas may no longer be direct emissions from industry etc., but remobilization of pollutants in contaminated soils. The diversity, fragmentation, and complexity of urban soils may lead to contamination by numerous pollutants and also considerable variation in the degree of contamination.

This is an accepted manuscript of a book chapter published by Wiley-Blackwell in Charlesworth, S.M. and Booth, C.A. (eds.) Urban Pollution: Science and Management in October 2018, available online: https://www.wiley.com/en-us/Urban+Pollution%3A+Science+and+Management-p-9781119260509 The accepted version of the publication may differ from the final published version.