Do challenge and threat evaluations predict netball performance and selection at trials in youth netball players? 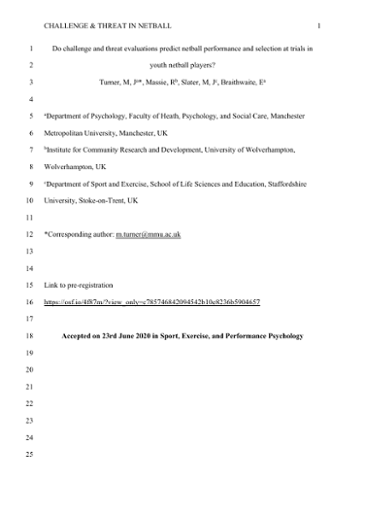 In the current paper, we investigated the extent to which challenge and threat evaluations predicted the trials performance of youth netball players. This paper compared two theoretical frameworks, the Theory of Challenge and Threat States in Athletes (TCTSA) and the BioPsychoSocial Model (BPSM) of Challenge and Threat, in their prediction of trials performance. A field-based cross-sectional design was adopted, including self-report psychometric, and observational performance, data. Data were collected prior to the participants’ trials performance. Youth female netball athletes (n = 92, Mage = 13.26 years, SD = 1.55) completed psychometrics concerning challenge and threat evaluations and emotions, in relation to upcoming trials performance. Performance was rated by 10 independent club coaches. Binary logistic and linear regression analyses revealed that BPSM derived resource evaluations (general self-confidence, general perception of positive challenge, positive disposition) were related to trials performance, whilst TCTSA-derived resource evaluations (self-efficacy, perceived control, goal orientation) were not. Also, a greater perceived ability to cope with demands was positively related to trial outcome. The strongest and most consistent predictor of performance was number of previous trials. The greater number of previously attended trials, the better the participants performed in trials. The findings reveal the importance of BPSM-derived resource evaluations and the perceived ability to cope with demands in the prediction of performance outcomes, over and above the TCTSA-derived resource evaluations. The findings also have important implications for sports teams, athletes, and coaches, who should strive to maximise perceptions of resources and coping abilities in the face of pressure situations, such as trials.

This is an accepted manuscript of an article published by American Psychological Association in Sport, Exercise, and Performance Psychology on 1 October 2020, available online at: https://doi.org/10.1037/spy0000248 The accepted version of the publication may differ from the final published version.

Institute for Community Research and Development