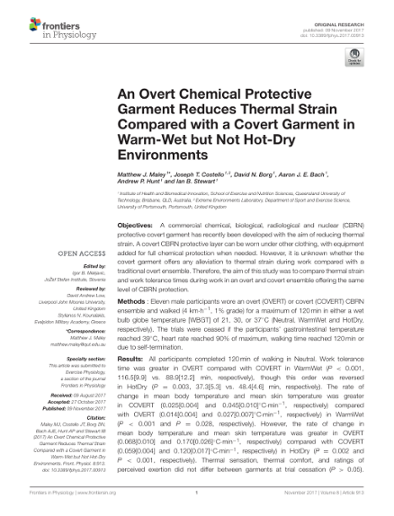 © 2017 Maley, Costello, Borg, Bach, Hunt and Stewart. Objectives: A commercial chemical, biological, radiological and nuclear (CBRN) protective covert garment has recently been developed with the aim of reducing thermal strain. A covert CBRN protective layer can be worn under other clothing, with equipment added for full chemical protection when needed. However, it is unknown whether the covert garment offers any alleviation to thermal strain during work compared with a traditional overt ensemble. Therefore, the aim of this study was to compare thermal strain and work tolerance times during work in an overt and covert ensemble offering the same level of CBRN protection. Methods: Eleven male participants wore an overt (OVERT) or covert (COVERT) CBRN ensemble and walked (4 km·h-1, 1% grade) for a maximum of 120 min in either a wet bulb globe temperature [WBGT] of 21, 30, or 37°C (Neutral, WarmWet and HotDry, respectively). The trials were ceased if the participants' gastrointestinal temperature reached 39°C, heart rate reached 90% of maximum, walking time reached 120 min or due to self-termination. Results: All participants completed 120 min of walking in Neutral. Work tolerance time was greater in OVERT compared with COVERT in WarmWet (P < 0.001, 116.5[9.9] vs. 88.9[12.2] min, respectively), though this order was reversed in HotDry (P = 0.003, 37.3[5.3] vs. 48.4[4.6] min, respectively). The rate of change in mean body temperature and mean skin temperature was greater in COVERT (0.025[0.004] and 0.045[0.010]°C·min-1, respectively) compared with OVERT (0.014[0.004] and 0.027[0.007]°C·min-1, respectively) in WarmWet (P < 0.001 and P = 0.028, respectively). However, the rate of change in mean body temperature and mean skin temperature was greater in OVERT (0.068[0.010] and 0.170[0.026]°C·min-1, respectively) compared with COVERT (0.059[0.004] and 0.120[0.017]°C·min-1, respectively) in HotDry (P = 0.002 and P < 0.001, respectively). Thermal sensation, thermal comfort, and ratings of perceived exertion did not differ between garments at trial cessation (P > 0.05). Conclusion: Those dressed in OVERT experienced lower thermal strain and longer work tolerance times compared with COVERT in a warm-wet environment. However, COVERT may be an optimal choice in a hot-dry environment. These findings have practical implications for those making decisions on the choice of CBRN ensemble to be used during work.

© 2017 The Authors. Published by Frontiers Media. This is an open access article available under a Creative Commons licence. The published version can be accessed at the following link on the publisher’s website: https://doi.org/10.3389/fphys.2017.00913