Prevalence of and risk factors for non-suicidal self-injury in rural China: Results from a nationwide survey in China 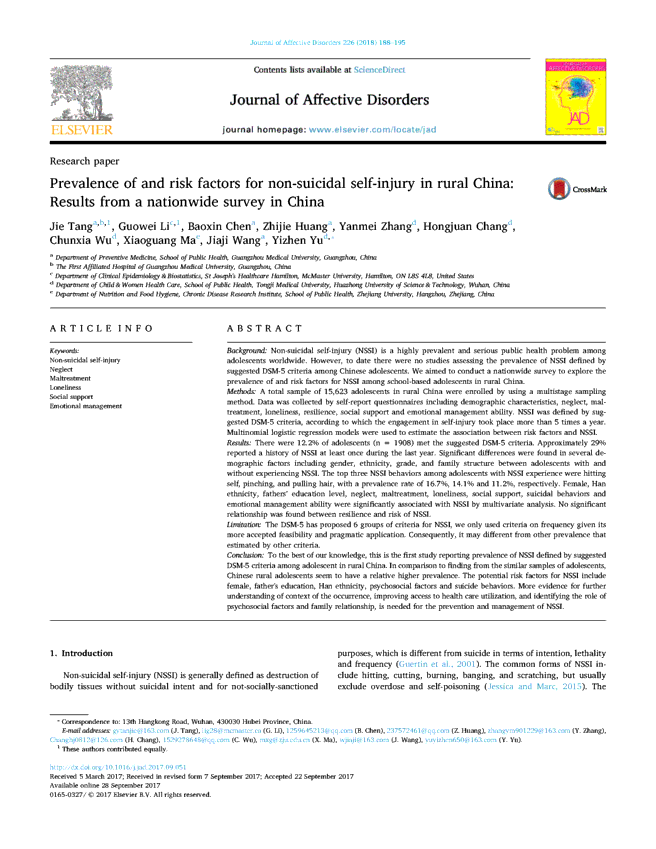 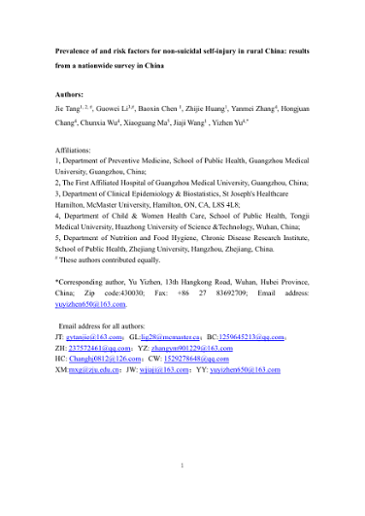 Background Non-suicidal self-injury (NSSI) is a highly prevalent and serious public health problem among adolescents worldwide. However, to date there were no studies assessing the prevalence of NSSI defined by suggested DSM-5 criteria among Chinese adolescents. We aimed to conduct a nationwide survey to explore the prevalence of and risk factors for NSSI among school-based adolescents in rural China. Methods A total sample of 15,623 adolescents in rural China were enrolled by using a multistage sampling method. Data was collected by self-report questionnaires including demographic characteristics, neglect, maltreatment, loneliness, resilience, social support and emotional management ability. NSSI was defined by suggested DSM-5 criteria, according to which the engagement in self-injury took place more than 5 times a year. Multinomial logistic regression models were used to estimate the association between risk factors and NSSI. Results There were 12.2% of adolescents (n = 1908) met the suggested DSM-5 criteria. Approximately 29% reported a history of NSSI at least once during the last year. Significant differences were found in several demographic factors including gender, ethnicity, grade, and family structure between adolescents with and without experiencing NSSI. The top three NSSI behaviors among adolescents with NSSI experience were hitting self, pinching, and pulling hair, with a prevalence rate of 16.7%, 14.1% and 11.2%, respectively. Female, Han ethnicity, fathers’ education level, neglect, maltreatment, loneliness, social support, suicidal behaviors and emotional management ability were significantly associated with NSSI by multivariate analysis. No significant relationship was found between resilience and risk of NSSI. Limitation The DSM-5 has proposed 6 groups of criteria for NSSI, we only used criteria on frequency given its more accepted feasibility and pragmatic application. Consequently, it may different from other prevalence that estimated by other criteria. Conclusion To the best of our knowledge, this is the first study reporting prevalence of NSSI defined by suggested DSM-5 criteria among adolescent in rural China. In comparison to finding from the similar samples of adolescents, Chinese rural adolescents seem to have a relative higher prevalence. The potential risk factors for NSSI include female, father's education, Han ethnicity, psychosocial factors and suicide behaviors. More evidence for further understanding of context of the occurrence, improving access to health care utilization, and identifying the role of psychosocial factors and family relationship, is needed for the prevention and management of NSSI.