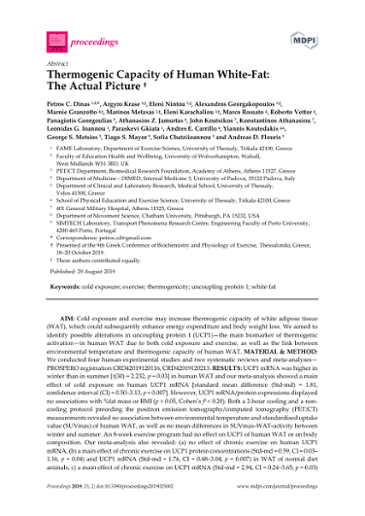 Cold exposure and exercise may increase thermogenic capacity of white adipose tissue (WAT), which could subsequently enhance energy expenditure and body weight loss. We aimed to identify possible alterations in uncoupling protein 1 (UCP1)—the main biomarker of thermogenic activation—in human WAT due to both cold exposure and exercise, as well as the link between environmental temperature and thermogenic capacity of human WAT. MATERIAL &amp; METHOD: We conducted four human experimental studies and two systematic reviews and meta-analyses—PROSPERO registration CRD42019120116, CRD42019120213. RESULTS: UCP1 mRNA was higher in winter than in summer [t(30) = 2.232, p = 0.03] in human WAT and our meta-analysis showed a main effect of cold exposure on human UCP1 mRNA [standard mean difference (Std-md) = 1.81, confidence interval (CI) = 0.50–3.13, p = 0.007]. However, UCP1 mRNA/protein expressions displayed no associations with %fat mass or BMI (p &gt; 0.05, Cohen’s f2 &lt; 0.20). Both a 2-hour cooling and a non-cooling protocol preceding the positron emission tomography/computed tomography (PET/CT) measurements revealed no association between environmental temperature and standardised uptake value (SUVmax) of human WAT, as well as no mean differences in SUVmax-WAT-activity between winter and summer. An 8-week exercise program had no effect on UCP1 of human WAT or on body composition. Our meta-analysis also revealed: (a) no effect of chronic exercise on human UCP1 mRNA, (b) a main effect of chronic exercise on UCP1 protein concentrations (Std-md = 0.59, CI = 0.03–1.16, p = 0.04) and UCP1 mRNA (Std-md = 1.76, CI = 0.48–3.04, p = 0.007) in WAT of normal diet animals, c) a main effect of chronic exercise on UCP1 mRNA (Std-md = 2.94, CI = 0.24–5.65, p = 0.03) and UCP1 protein concentrations (Std-md = 2.06, CI = 0.07–4.05, p = 0.04) of high-fat diet animals. CONCLUSIONS: Cold exposure represents a main stimulus for increased thermogenic capacity in human white adipocytes; however, this may have no impact on body weight loss. Chronic exercise may represent no major stimulus for UCP1 induced in human white adipocytes, while in animals it increases UCP1 gene independently of their diet. Therefore, evidence from animal studies regarding UCP1 gene activation in white adipocytes may not be applicable in humans. Finally, the identification of human WAT thermogenic capacity via PET/CT examination may be optimal with both a cooling and a non-cooling protocol.

Presented at the 9th Greek Conference of Biochemistry and Physiology of Exercise, Thessaloniki, Greece, 18–20 October 2019