Did Wigan have a northern soul? 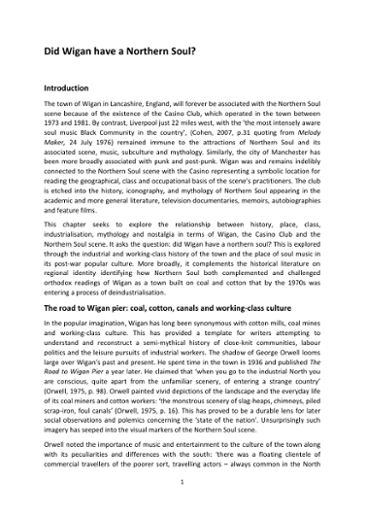 The town of Wigan in Lancashire, England, will forever be associated with the Northern Soul scene because of the existence of the Casino Club, which operated in the town between 1973 and 1981. By contrast, Liverpool just 22 miles west, with the ‘the most intensely aware soul music Black Community in the country’, (Cohen, 2007, p.31 quoting from Melody Maker, 24 July 1976) remained immune to the attractions of Northern Soul and its associated scene, music, subculture and mythology. Similarly, the city of Manchester has been more broadly associated with punk and post-punk. Wigan was and remains indelibly connected to the Northern Soul scene with the Casino representing a symbolic location for reading the geographical, class and occupational basis of the scene’s practitioners. The club is etched into the history, iconography, and mythology of Northern Soul appearing in the academic and more general literature, television documentaries, memoirs, autobiographies and feature films. This chapter seeks to explore the relationship between history, place, class, industrialisation, mythology and nostalgia in terms of Wigan, the Casino Club and the Northern Soul scene. It asks the question: did Wigan have a northern soul? This is explored through the industrial and working-class history of the town and the place of soul music in its post-war popular culture. More broadly, it complements the historical literature on regional identity identifying how Northern Soul both complemented and challenged orthodox readings of Wigan as a town built on coal and cotton that by the 1970s was entering a process of deindustrialisation.