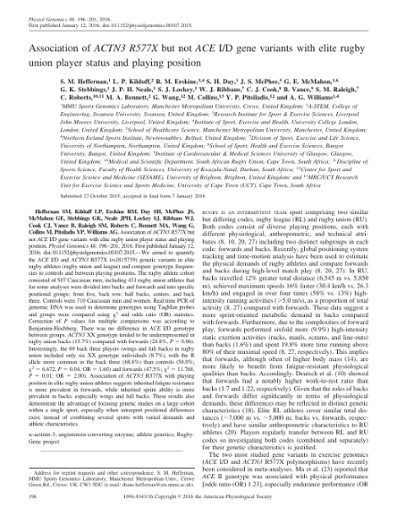 We aimed to quantify the ACE I/D and ACTN3 R577X (rs1815739) genetic variants in elite rugby athletes (rugby union and league) and compare genotype frequencies to controls and between playing positions. The rugby athlete cohort consisted of 507 Caucasian men, including 431 rugby union athletes that for some analyses were divided into backs and forwards and into specific positional groups: front five, back row, half backs, centers, and back three. Controls were 710 Caucasian men and women. Real-time PCR of genomic DNA was used to determine genotypes using TaqMan probes and groups were compared using χ2 and odds ratio (OR) statistics. Correction of P values for multiple comparisons was according to Benjamini-Hochberg. There was no difference in ACE I/D genotype between groups. ACTN3 XX genotype tended to be underrepresented in rugby union backs (15.7%) compared with forwards (24.8%, P = 0.06). Interestingly, the 69 back three players (wings and full backs) in rugby union included only six XX genotype individuals (8.7%), with the R allele more common in the back three (68.8%) than controls (58.0%; χ2 = 6.672, P = 0.04; OR = 1.60) and forwards (47.5%; χ2 = 11.768, P = 0.01; OR = 2.00). Association of ACTN3 R577X with playing position in elite rugby union athletes suggests inherited fatigue resistance is more prevalent in forwards, while inherited sprint ability is more prevalent in backs, especially wings and full backs. These results also demonstrate the advantage of focusing genetic studies on a large cohort within a single sport, especially when intrasport positional differences exist, instead of combining several sports with varied demands and athlete characteristics. rugby is an intermittent team sport comprising two similar but differing codes, rugby league (RL) and rugby union (RU). Both codes consist of diverse playing positions, each with different physiological, anthropometric, and technical attributes (8, 10, 20, 27) including two distinct subgroups in each code: forwards and backs. Recently, global positioning system tracking and time-motion analysis have been used to estimate the physical demands of rugby athletes and compare forwards and backs during high-level match play (8, 20, 27). In RU, backs travelled 12% greater total distance (6,545 m vs. 5,850 m), achieved maximum speeds 16% faster (30.4 km/h vs. 26.3 km/h) and engaged in over four times (58% vs. 13%) high-intensity running activities (>5.0 m/s), as a proportion of total activity (8, 27) compared with forwards. These data suggest a more sprint-oriented metabolic demand in backs compared with forwards. Furthermore, due to the complexities of forward play, forwards performed sixfold more (9.9%) high-intensity static exertion activities (rucks, mauls, scrums, and line-outs) than backs (1.6%) and spent 19.8% more time running above 80% of their maximal speed (8, 27, respectively). This implies that forwards, although often of higher body mass (14), are more likely to benefit from fatigue-resistant physiological qualities than backs. Accordingly, Deutsch et al. (10) showed that forwards had a notably higher work-to-rest ratio than backs (1:7 and 1:22, respectively). Given that the roles of backs and forwards differ significantly in terms of physiological demands, these differences may be reflected in distinct genetic characteristics (18). Elite RL athletes cover similar total distances (∼7,000 m vs. ∼5,000 m; backs vs. forwards, respectively) and have similar anthropometric characteristics to RU athletes (20). Players regularly transfer between RL and RU codes so investigating both codes (combined and separately) for their genetic characteristics is justified. The two most studied gene variants in exercise genomics (ACE I/D and ACTN3 R577X polymorphisms) have recently been considered in meta-analyses. Ma et al. (23) reported that ACE II genotype was associated with physical performance [odds ratio (OR) 1.23], especially endurance performance (OR 1.35). Furthermore, ACTN3 RR genotype was associated with speed and power performance (OR 1.21; 23), supported elsewhere (2). More extensive information regarding ACE I/D and ACTN3 R577X polymorphisms is available (13, 26). Due to differences in physical characteristics between rugby athletes and the general population and the diverse physiological demands within rugby, these genetic markers could predispose athletes to success or specific roles at the elite level. One recent paper examined ACE I/D genotype frequency distribution in young, nonelite RU athletes. ACE I/D genotype frequencies did not differ between forwards and backs, with no control group included (5). The same group (4) also investigated ACTN3 R577X in 102 young male RU athletes and reported no association, despite some tendencies for the R allele to be more frequent in backs or subgroups of backs. Studying elite athletes would be better able to answer the question whether these genetic variants are associated with elite status and playing position in rugby. Therefore, the purpose of the present study was to investigate whether elite rugby athletes in the RugbyGene project (18) and a control group differed in terms of ACE I/D and ACTN3 R577X genotype distribution and whether athletes in specialized playing positions similarly differed. It was hypothesized that the ACTN3 R allele and the ACE I allele would be more frequent in rugby athletes than controls. It was further hypothesized that ACTN3 XX and ACE II genotypes would be underrepresented in RU backs compared with forwards, due to differences in overall work-to-rest ratio and differing requirements for high maximum speed.