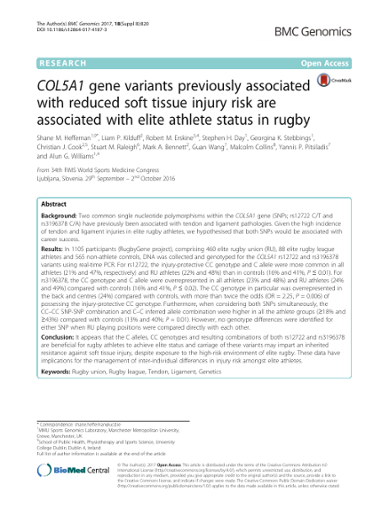 Background Two common single nucleotide polymorphisms within the COL5A1 gene (SNPs; rs12722 C/T and rs3196378 C/A) have previously been associated with tendon and ligament pathologies. Given the high incidence of tendon and ligament injuries in elite rugby athletes, we hypothesised that both SNPs would be associated with career success. Results In 1105 participants (RugbyGene project), comprising 460 elite rugby union (RU), 88 elite rugby league athletes and 565 non-athlete controls, DNA was collected and genotyped for the COL5A1 rs12722 and rs3196378 variants using real-time PCR. For rs12722, the injury-protective CC genotype and C allele were more common in all athletes (21% and 47%, respectively) and RU athletes (22% and 48%) than in controls (16% and 41%, P ≤ 0.01). For rs3196378, the CC genotype and C allele were overrepresented in all athletes (23% and 48%) and RU athletes (24% and 49%) compared with controls (16% and 41%, P ≤ 0.02). The CC genotype in particular was overrepresented in the back and centres (24%) compared with controls, with more than twice the odds (OR = 2.25, P = 0.006) of possessing the injury-protective CC genotype. Furthermore, when considering both SNPs simultaneously, the CC–CC SNP-SNP combination and C–C inferred allele combination were higher in all the athlete groups (≥18% and ≥43%) compared with controls (13% and 40%; P = 0.01). However, no genotype differences were identified for either SNP when RU playing positions were compared directly with each other. Conclusion It appears that the C alleles, CC genotypes and resulting combinations of both rs12722 and rs3196378 are beneficial for rugby athletes to achieve elite status and carriage of these variants may impart an inherited resistance against soft tissue injury, despite exposure to the high-risk environment of elite rugby. These data have implications for the management of inter-individual differences in injury risk amongst elite athletes.

© 2017 The Authors. Published by Springer Nature. This is an open access article available under a Creative Commons licence. The published version can be accessed at the following link on the publisher’s website: https://doi.org/10.1186/s12864-017-4187-3