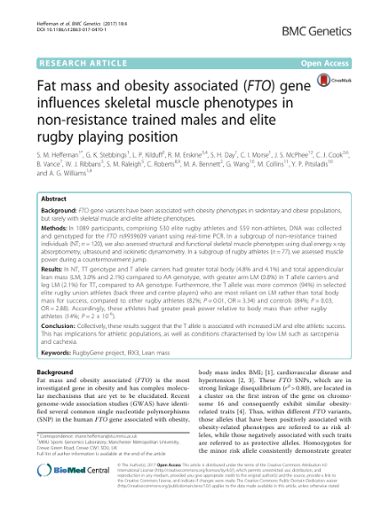 Background FTO gene variants have been associated with obesity phenotypes in sedentary and obese populations, but rarely with skeletal muscle and elite athlete phenotypes. Methods In 1089 participants, comprising 530 elite rugby athletes and 559 non-athletes, DNA was collected and genotyped for the FTO rs9939609 variant using real-time PCR. In a subgroup of non-resistance trained individuals (NT; n = 120), we also assessed structural and functional skeletal muscle phenotypes using dual energy x-ray absorptiometry, ultrasound and isokinetic dynamometry. In a subgroup of rugby athletes (n = 77), we assessed muscle power during a countermovement jump. Results In NT, TT genotype and T allele carriers had greater total body (4.8% and 4.1%) and total appendicular lean mass (LM; 3.0% and 2.1%) compared to AA genotype, with greater arm LM (0.8%) in T allele carriers and leg LM (2.1%) for TT, compared to AA genotype. Furthermore, the T allele was more common (94%) in selected elite rugby union athletes (back three and centre players) who are most reliant on LM rather than total body mass for success, compared to other rugby athletes (82%; P = 0.01, OR = 3.34) and controls (84%; P = 0.03, OR = 2.88). Accordingly, these athletes had greater peak power relative to body mass than other rugby athletes (14%; P = 2 x 10-6). Conclusion Collectively, these results suggest that the T allele is associated with increased LM and elite athletic success. This has implications for athletic populations, as well as conditions characterised by low LM such as sarcopenia and cachexia.