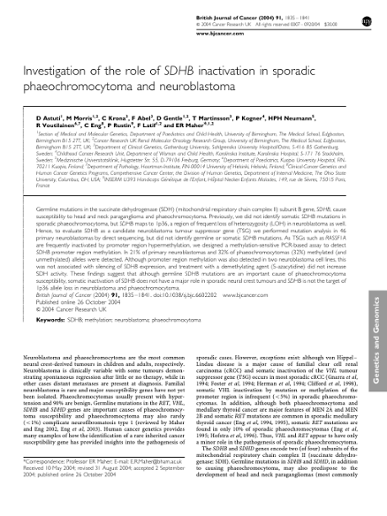 Germline mutations in the succinate dehydrogenase (SDH) (mitochondrial respiratory chain complex II) subunit B gene, SDHB, cause susceptibility to head and neck paraganglioma and phaeochromocytoma. Previously, we did not identify somatic SDHB mutations in sporadic phaeochromocytoma, but SDHB maps to 1p36, a region of frequent loss of heterozygosity (LOH) in neuroblastoma as well. Hence, to evaluate SDHB as a candidate neuroblastoma tumour suppressor gene (TSG) we performed mutation analysis in 46 primary neuroblastomas by direct sequencing, but did not identify germline or somatic SDHB mutations. As TSGs such as RASSF1A are frequently inactivated by promoter region hypermethylation, we designed a methylation-sensitive PCR-based assay to detect SDHB promoter region methylation. In 21% of primary neuroblastomas and 32% of phaeochromocytomas (32%) methylated (and unmethylated) alleles were detected. Although promoter region methylation was also detected in two neuroblastoma cell lines, this was not associated with silencing of SDHB expression, and treatment with a demethylating agent (5-azacytidine) did not increase SDH activity. These findings suggest that although germline SDHB mutations are an important cause of phaeochromocytoma susceptibility, somatic inactivation of SDHB does not have a major role in sporadic neural crest tumours and SDHB is not the target of 1p36 allele loss in neuroblastoma and phaeochromocytoma. © 2004 Cancer Research UK.

Except where otherwise noted, this item's license is described as https://creativecommons.org/licenses/by-sa/4.0/