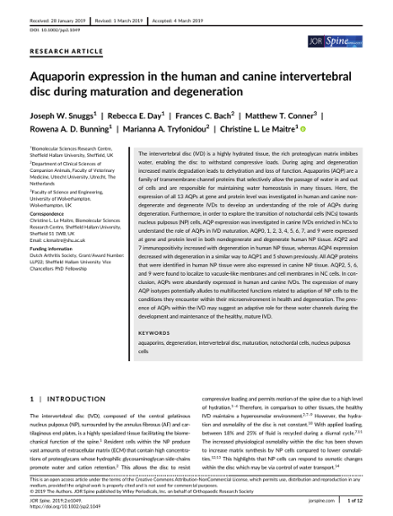 The intervertebral disc (IVD) is a highly hydrated tissue, the rich proteoglycan matrix imbibes water, enabling the disc to withstand compressive loads. During aging and degeneration increased matrix degradation leads to dehydration and loss of function. Aquaporins (AQP) are a family of transmembrane channel proteins that selectively allow the passage of water in and out of cells and are responsible for maintaining water homeostasis in many tissues. Here, the expression of all 13 AQPs at gene and protein level was investigated in human and canine nondegenerate and degenerate IVDs to develop an understanding of the role of AQPs during degeneration. Furthermore, in order to explore the transition of notochordal cells (NCs) towards nucleus pulposus (NP) cells, AQP expression was investigated in canine IVDs enriched in NCs to understand the role of AQPs in IVD maturation. AQP0, 1, 2, 3, 4, 5, 6, 7, and 9 were expressed at gene and protein level in both nondegenerate and degenerate human NP tissue. AQP2 and 7 immunopositivity increased with degeneration in human NP tissue, whereas AQP4 expression decreased with degeneration in a similar way to AQP1 and 5 shown previously. All AQP proteins that were identified in human NP tissue were also expressed in canine NP tissue. AQP2, 5, 6, and 9 were found to localize to vacuole‐like membranes and cell membranes in NC cells. In conclusion, AQPs were abundantly expressed in human and canine IVDs. The expression of many AQP isotypes potentially alludes to multifaceted functions related to adaption of NP cells to the conditions they encounter within their microenvironment in health and degeneration. The presence of AQPs within the IVD may suggest an adaptive role for these water channels during the development and maintenance of the healthy, mature IVD.

Except where otherwise noted, this item's license is described as https://creativecommons.org/licenses/by-nc/4.0/