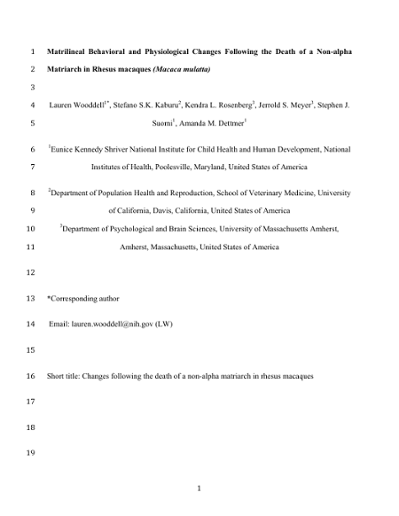 In many species, the loss of alpha matriarchs is associated with a number of negative outcomes such as troop fission, eviction, wounding, and reduced vitality. However, whether the dramatic consequences of their loss are due to their role as an old experienced figure or to their alpha status remains unclear. In a retrospective study, we tested that in a semi-free ranging colony of rhesus macaques (Macaca mulatta), the removal of a non-alpha matriarch, who had a large set of kin, led to changes in behavior and physiological stress within her matriline. Following her removal, her matriline increased in aggression, vigilance, and social grooming. Additionally, hierarchical stability, measured by levels of rank changes, decreased within her matriline, and levels of intense aggression by high-ranking animals were more frequent, as well as matrilineal wounding. Although ordinal rank was positively associated with higher chronic hair cortisol concentrations (HCCs) in the months before the matriarch’s removal, following her removal, only those who experienced large increases in rank within her matriline displayed higher HCCs. Changes in matrilineal stability, aggression, behavior, and HCCs within the other two matrilines in the troop were not evident, although caution is needed due to the small sample sizes. We conclude that the removal of the non-alpha matriarch led to matrilineal instability, characterized by higher levels of aggression and subsequent vigilance, rank changes, physiological stress, and grooming. We suggest that non-alpha matriarchs with a large number of kin and social support can be integral to the stability of matrilines.