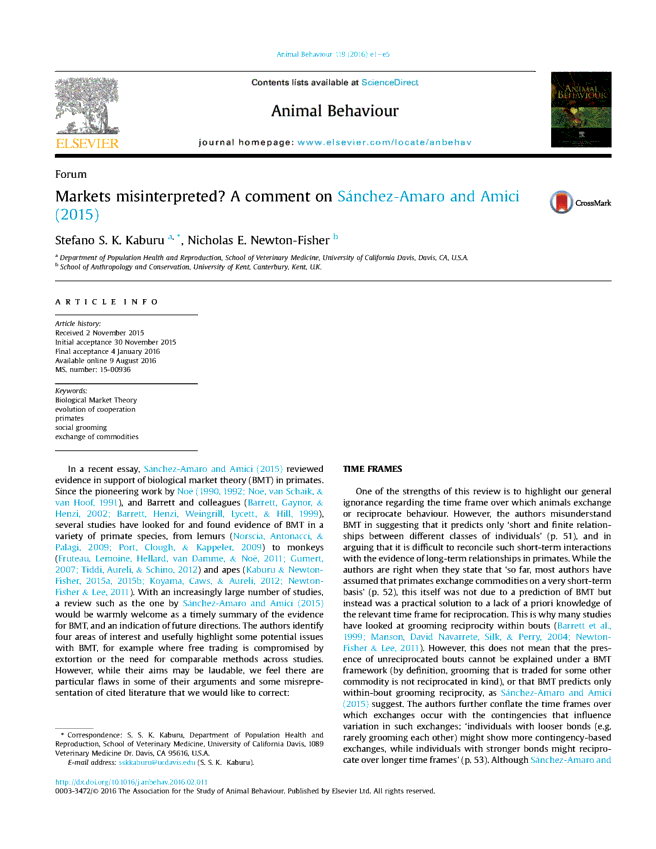 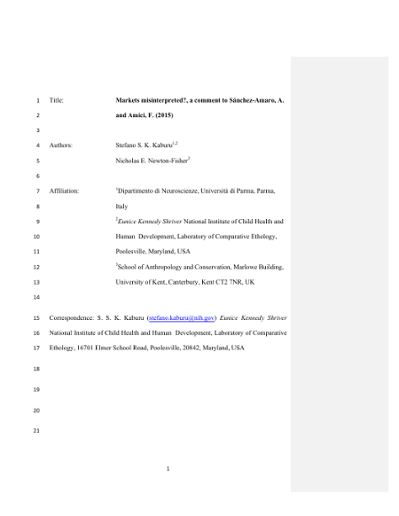 In a recent essay, Sánchez-Amaro and Amici (2015) reviewed evidence in support of biological market theory (BMT) in primates. Since the pioneering work by Noë (1990, 1992; Noë, van Schaik, & van Hoof, 1991), and Barrett and colleagues (Barrett, Gaynor, & Henzi, 2002; Barrett, Henzi, Weingrill, Lycett, & Hill, 1999), several studies have looked for and found evidence of BMT in a variety of primate species, from lemurs (Norscia, Antonacci, & Palagi, 2009; Port, Clough, & Kappeler, 2009) to monkeys (Gumert 2007; Tiddi, Aureli, & Schino 2012; Fruteau, Lemoine, Hellard, van Damme & Noë, 2011) and apes (Koyama, Caws, & Aureli, 2012; Newton-Fisher & Lee, 2011; Kaburu & Newton-Fisher, 2015a, 2015b). With an increasingly large number of studies, a review such as the one by Sánchez-Amaro and Amici (2015) would be warmly welcome as a timely summary of the evidence for BMT, and an indication of future directions. The authors identify four areas of interest and usefully highlight some potential issues with BMT, for example where free trading is compromised by extortion or the need for comparable methods across studies. However, while their aims may be laudable, we feel there are particular flaws in some of their arguments and some misrepresentation of cited literature that we would like to correct.