The taxonomic history of the enigmatic Papuan snake genus Toxicocalamus (Elapidae: Hydrophiinae), with the description of a new species from the Managalas Plateau of Oro Province, Papua New Guinea, and a revised dichotomous key 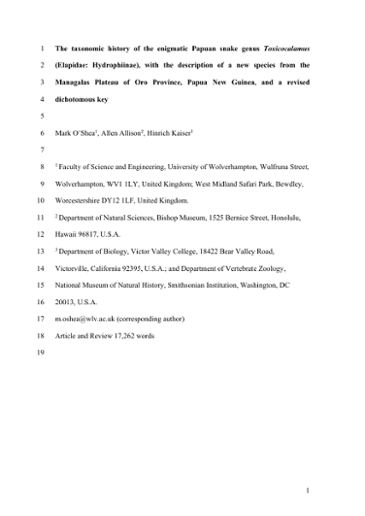 We trace the taxonomic history of Toxicocalamus, a poorly known genus of primarily vermivorous snakes found only in New Guinea and associated island archipelagos. With only a relatively limited number of specimens to examine, and the distribution of those specimens across many natural history collections, it has been a difficult task to assemble a complete taxonomic assessment of this group. As a consequence, research on these snakes has undergone a series of fits and starts, and we here present the first comprehensive chronology of the genus, beginning with its original description by George Albert Boulenger in 1896. We also describe a new species from the northern versant of the Owen Stanley Range, Oro Province, Papua New Guinea, and we present a series of comparisons that include heretofore underused characteristics, including those of unusual scale patterns, skull details, and tail tip morphology. Defined by the smallest holotype in the genus, the new species is easily differentiated from all other Toxicocalamus by a combination of the following eidonomic characters: fused prefrontal-internasal scute; single preocular, separate, not fused with prefrontal; minute circular, counter-sunk naris in the centre of a large, undivided, nasal scute; paired postoculars; single anterior temporal and paired posterior temporals; six supralabials, with 3rd and 4th supralabial contacting the orbit; dorsal scales in 15-15-15 rows; 235 ventral scales, 35 paired subcaudal scales; paired cloacal scales preceded by paired precloacal scales; and a short, laterally slightly compressed, ‘Ultrocalamus-type’ tail, terminating in a short conical scale. Differences from congeners in skull morphology include a reduced anterior extent of the parasphenoid, termination of the palatine tooth row at the anterior level of the parasphenoid, extent and shape of the premaxilla, shape and size of the prootics, extent and shape of the exoccipitals and occipital condyles, and features of the atlas-axis complex. This is the fifteenth species in the genus Toxicocalamus.