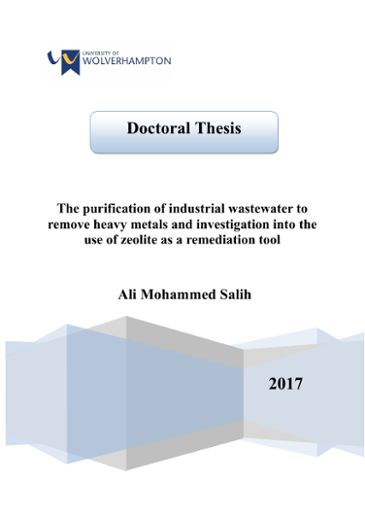 Zeolites are well-known aluminosilicate minerals that have been widely used as adsorbents in separation, purification processes and environmental pollution control. Zeolites are used in various industrial applications due to their high cation-exchange ability, molecular sieve and cataltic properties. In order to reduce the costs of acquisition and minimise the disposal of adsorbents, both modified natural zeolite and synthetic zeolite (derived from kaolinite) were used for the purification of wastewater. The characteristic properties and applications of adsorbents are also discussed including the advantages and disadvantages of each technique. The present work involves the study of the removal of Cu2+, Fe3+, Pb2+ and Zn2+ from synthetic metal solutions using natural zeolite. Laboratory experiments were used to investigate the efficiency of adsorbents in the uptake of heavy metals from industrial wastewater. These include equilibrium tests, kinetic studies and regeneration studies. The physical and chemical characterization of the zeolites was carried out using different analytical techniques such as Scanning Electron Microscopy (SEM), Energy Dispersive Spectroscopy (EDS), X – Ray Diffraction (XRD), X – Ray Fluorescence (XRF), Thermogravimetric Analysis (TGA), Fourier Transform Infrared (FT-IR) Spectroscopy and Inductively Coupled Plasma-Optical Emission Spectrometer (ICP-OES). The kinetic study indicated the suitability of the natural zeolite for the removal of Cu2+, Fe3+, Pb2+ and Zn2+ ions from synthetic wastewater. Batch experiments were used to identify the effect of parameters that affect the rate of adsorption such as the effect of adsorbent mass, effect of adsorbent particle size, effect of initial solution pH, effect of initial solution concentration, effect of agitation speed and effect of pre-treatment of adsorbent and evaluated their impact on the efficiency of the zeolite in the removal of heavy metals from industrial wastewater. The kinetic studies showed that the capacity of the adsorbents for the removal of heavy metals increased with a greater mass of absorbent, increased initial solution pH, increased agitation speed, higher solution concentration as well as the application of a pre-treatment. The results from the equilibrium studies positively demonstrated that natural zeolite can be used as an excellent adsorbent for removing heavy metals from multi-component solutions. The equilibrium experiments indicated that the capacities of natural zeolite for the uptake of heavy metals increased when the initial solution pH increased. The results indicated that the maximum removal capacities Q were 22.83, 14.92, 14.49 and 17.54 mg/g natural zeolite for copper, iron, zinc, and lead respectively. Both the Langmuir and Freundlich isotherm models were used to characterize the experimental data and to assess the adsorption behaviour of natural zeolite for copper, iron, lead and zinc. The experimental data were slightly better suited to the Langmuir isotherm than the Freundlinch isotherm. The value of the correlation coefficients r2 ranged from 0.93 to 0.99 for the Langmuir isotherm and from 0.90 to 0.99 for the Freundlich isotherm. The present work also involved the study of synthetic zeolite A, which was derived from natural kaolinite. The conversion of the raw materials into zeolitic materials was carried out in two ways: first, conventional hydrothermal synthesis and second, alkaline fusion prior to hydrothermal synthesis. The results from both routes show that zeolite A was synthesised successfully. Finally, the experiments show that both natural and synthetic zeolites can be available in commercial quantities. Synthetic zeolites are more attractive for some specific applications, while the cheapness of natural zeolite may favour its use.