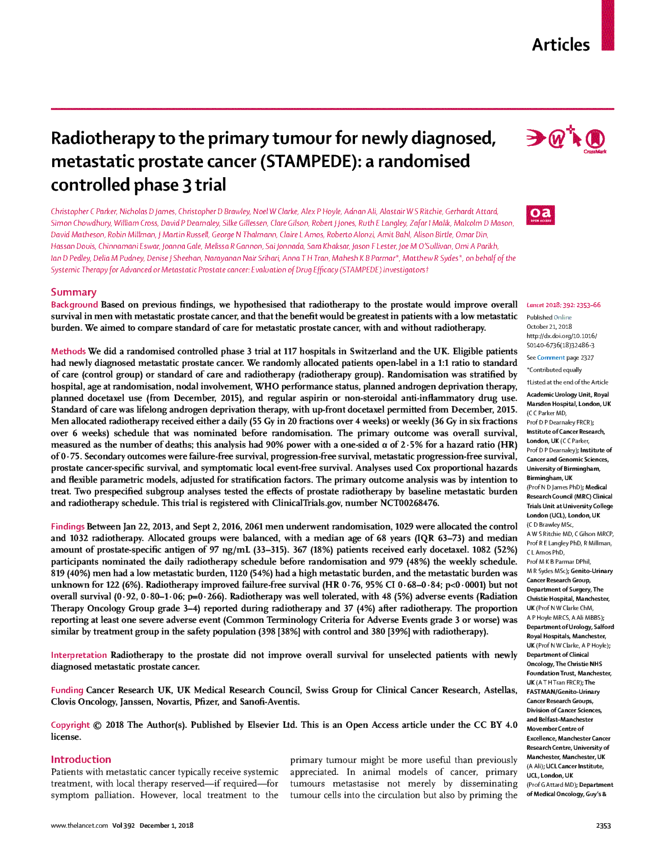 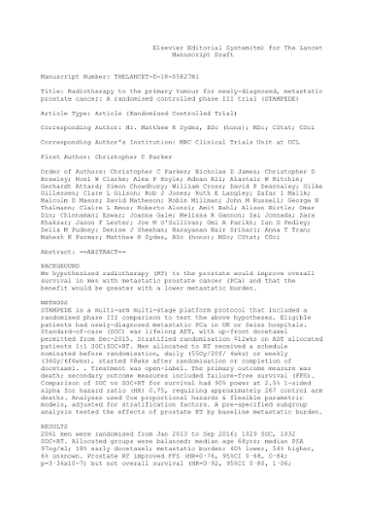 Background Based on previous findings, we hypothesised that radiotherapy to the prostate would improve overall survival in men with metastatic prostate cancer, and that the benefit would be greatest in patients with a low metastatic burden. We aimed to compare standard of care for metastatic prostate cancer, with and without radiotherapy. Methods We did a randomised controlled phase 3 trial at 117 hospitals in Switzerland and the UK. Eligible patients had newly diagnosed metastatic prostate cancer. We randomly allocated patients open-label in a 1:1 ratio to standard of care (control group) or standard of care and radiotherapy (radiotherapy group). Randomisation was stratified by hospital, age at randomisation, nodal involvement, WHO performance status, planned androgen deprivation therapy, planned docetaxel use (from December, 2015), and regular aspirin or non-steroidal anti-inflammatory drug use. Standard of care was lifelong androgen deprivation therapy, with up-front docetaxel permitted from December, 2015. Men allocated radiotherapy received either a daily (55 Gy in 20 fractions over 4 weeks) or weekly (36 Gy in six fractions over 6 weeks) schedule that was nominated before randomisation. The primary outcome was overall survival, measured as the number of deaths; this analysis had 90% power with a one-sided α of 2·5% for a hazard ratio (HR) of 0·75. Secondary outcomes were failure-free survival, progression-free survival, metastatic progression-free survival, prostate cancer-specific survival, and symptomatic local event-free survival. Analyses used Cox proportional hazards and flexible parametric models, adjusted for stratification factors. The primary outcome analysis was by intention to treat. Two prespecified subgroup analyses tested the effects of prostate radiotherapy by baseline metastatic burden and radiotherapy schedule. This trial is registered with ClinicalTrials.gov, number NCT00268476. Findings Between Jan 22, 2013, and Sept 2, 2016, 2061 men underwent randomisation, 1029 were allocated the control and 1032 radiotherapy. Allocated groups were balanced, with a median age of 68 years (IQR 63–73) and median amount of prostate-specific antigen of 97 ng/mL (33–315). 367 (18%) patients received early docetaxel. 1082 (52%) participants nominated the daily radiotherapy schedule before randomisation and 979 (48%) the weekly schedule. 819 (40%) men had a low metastatic burden, 1120 (54%) had a high metastatic burden, and the metastatic burden was unknown for 122 (6%). Radiotherapy improved failure-free survival (HR 0·76, 95% CI 0·68–0·84; p<0·0001) but not overall survival (0·92, 0·80–1·06; p=0·266). Radiotherapy was well tolerated, with 48 (5%) adverse events (Radiation Therapy Oncology Group grade 3–4) reported during radiotherapy and 37 (4%) after radiotherapy. The proportion reporting at least one severe adverse event (Common Terminology Criteria for Adverse Events grade 3 or worse) was similar by treatment group in the safety population (398 [38%] with control and 380 [39%] with radiotherapy). Interpretation Radiotherapy to the prostate did not improve overall survival for unselected patients with newly diagnosed metastatic prostate cancer.