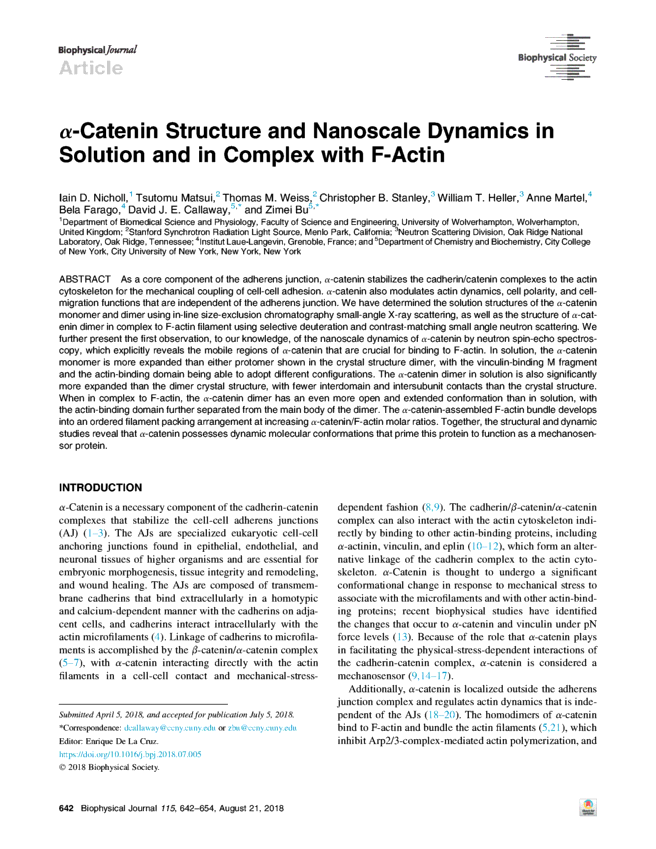 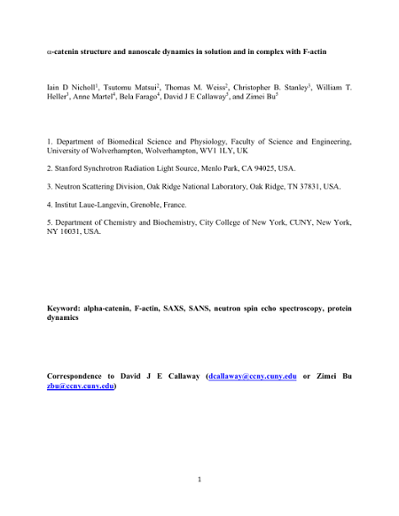 As a core component of the adherens junction, α-catenin stabilizes the cadherin/catenin complexes to the actin cytoskeleton for the mechanical coupling of cell-cell adhesion. α-catenin also modulates actin dynamics, cell polarity, and cell-migration functions that are independent of the adherens junction. We have determined the solution structures of the α-catenin monomer and dimer using in-line size-exclusion chromatography small-angle X-ray scattering, as well as the structure of α-catenin dimer in complex to F-actin filament using selective deuteration and contrast-matching small angle neutron scattering. We further present the first observation, to our knowledge, of the nanoscale dynamics of α-catenin by neutron spin-echo spectroscopy, which explicitly reveals the mobile regions of α-catenin that are crucial for binding to F-actin. In solution, the α-catenin monomer is more expanded than either protomer shown in the crystal structure dimer, with the vinculin-binding M fragment and the actin-binding domain being able to adopt different configurations. The α-catenin dimer in solution is also significantly more expanded than the dimer crystal structure, with fewer interdomain and intersubunit contacts than the crystal structure. When in complex to F-actin, the α-catenin dimer has an even more open and extended conformation than in solution, with the actin-binding domain further separated from the main body of the dimer. The α-catenin-assembled F-actin bundle develops into an ordered filament packing arrangement at increasing α-catenin/F-actin molar ratios. Together, the structural and dynamic studies reveal that α-catenin possesses dynamic molecular conformations that prime this protein to function as a mechanosensor protein.

This research was funded by National Science Foundation grant MCB- 1817684 to Z.B. and 2G12 RR003060 from the National Center for Research Resources to City College of New York. Use of the Stanford Synchrotron Radiation Lightsource, SLAC National Accelerator Laboratory, is supported by the U.S. Department of Energy, Office of Science, Office of Basic Energy Sciences under Contract No. DE-AC02-76SF00515. The SSRL Structural Molecular Biology Program is supported by the Department of Energy Office of Biological and Environmental Research, and by the National Institutes of Health, National Institute of General Medical Sciences (including P41GM103393). A portion of the research conducted at Oak Ridge National Laboratory’s Spallation Neutron Source was sponsored by the Scientific User Facilities Division, Office of Basic Energy Sciences, U.S. Department of Energy. I.D.N. acknowledges the support of the ILL for costs for travel and subsistence.
ae974a485f413a2113503eed53cd6c53
10.1016/j.bpj.2018.07.005