Statistical properties and time-frequency analysis of temperature, salinity and turbidity measured by the MAREL Carnot station in the coastal waters of Boulogne-sur-Mer (France) 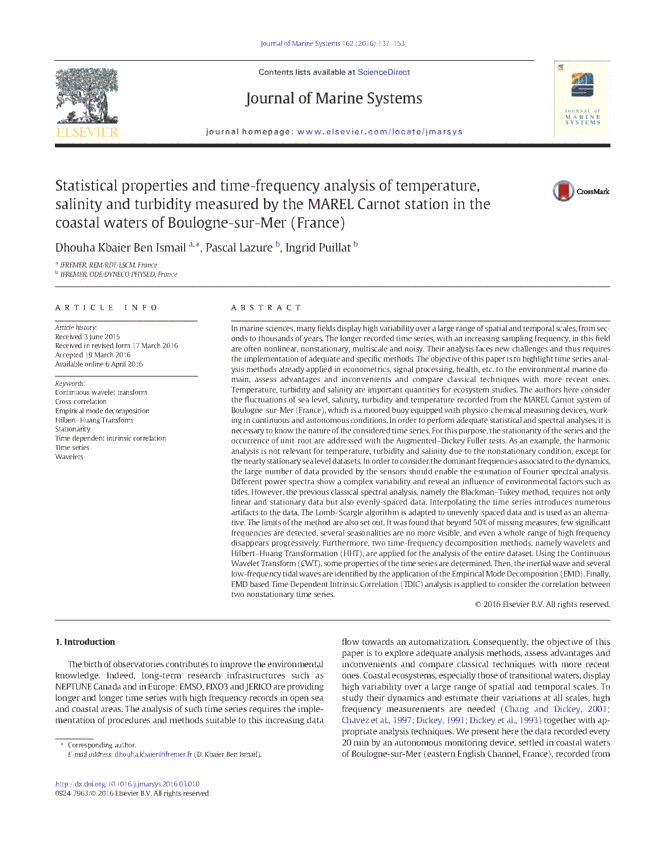 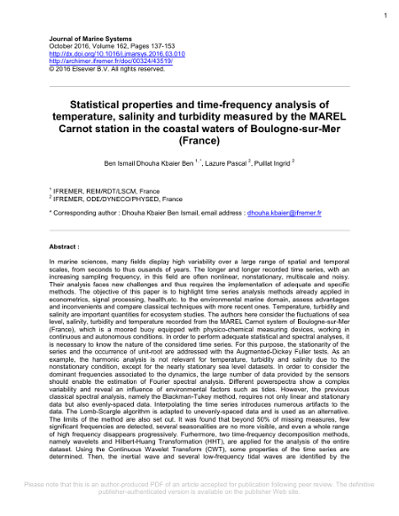 In marine sciences, many fields display high variability over a large range of spatial and temporal scales, from seconds to thousands of years. The longer recorded time series, with an increasing sampling frequency, in this field are often nonlinear, nonstationary, multiscale and noisy. Their analysis faces new challenges and thus requires the implementation of adequate and specific methods. The objective of this paper is to highlight time series analysis methods already applied in econometrics, signal processing, health, etc. to the environmental marine domain, assess advantages and inconvenients and compare classical techniques with more recent ones. Temperature, turbidity and salinity are important quantities for ecosystem studies. The authors here consider the fluctuations of sea level, salinity, turbidity and temperature recorded from the MAREL Carnot system of Boulogne-sur-Mer (France), which is a moored buoy equipped with physico-chemical measuring devices, working in continuous and autonomous conditions. In order to perform adequate statistical and spectral analyses, it is necessary to know the nature of the considered time series. For this purpose, the stationarity of the series and the occurrence of unit-root are addressed with the Augmented–Dickey Fuller tests. As an example, the harmonic analysis is not relevant for temperature, turbidity and salinity due to the nonstationary condition, except for the nearly stationary sea level datasets. In order to consider the dominant frequencies associated to the dynamics, the large number of data provided by the sensors should enable the estimation of Fourier spectral analysis. Different power spectra show a complex variability and reveal an influence of environmental factors such as tides. However, the previous classical spectral analysis, namely the Blackman–Tukey method, requires not only linear and stationary data but also evenly-spaced data. Interpolating the time series introduces numerous artifacts to the data. The Lomb–Scargle algorithm is adapted to unevenly-spaced data and is used as an alternative. The limits of the method are also set out. It was found that beyond 50% of missing measures, few significant frequencies are detected, several seasonalities are no more visible, and even a whole range of high frequency disappears progressively. Furthermore, two time-frequency decomposition methods, namely wavelets and Hilbert–Huang Transformation (HHT), are applied for the analysis of the entire dataset. Using the Continuous Wavelet Transform (CWT), some properties of the time series are determined. Then, the inertial wave and several low-frequency tidal waves are identified by the application of the Empirical Mode Decomposition (EMD). Finally, EMD based Time Dependent Intrinsic Correlation (TDIC) analysis is applied to consider the correlation between two nonstationary time series.

This is an accepted manuscript of an article published by Elsevier in Journal of Marine Systems on 06/04/2016, available online: https://doi.org/10.1016/j.jmarsys.2016.03.010 The accepted version of the publication may differ from the final published version.