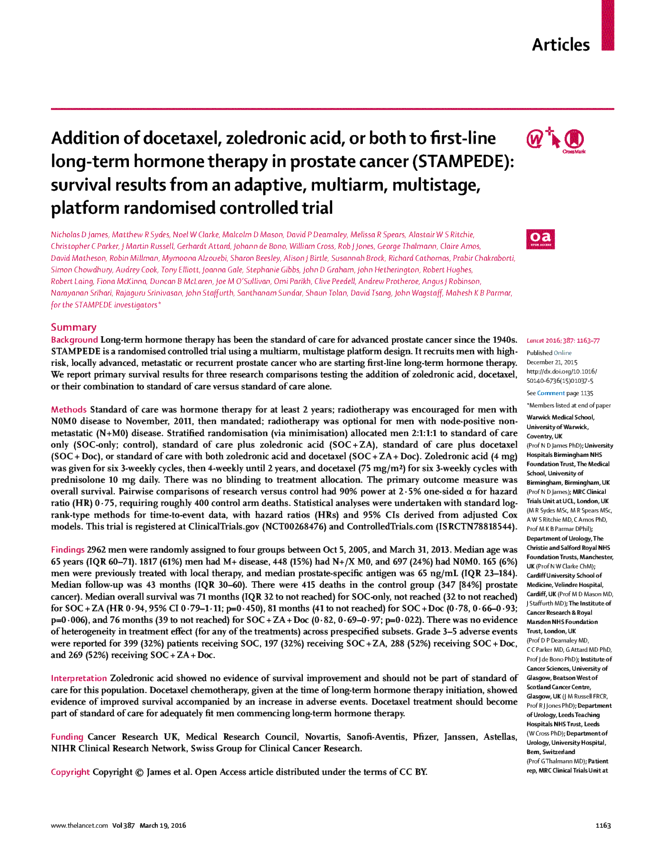 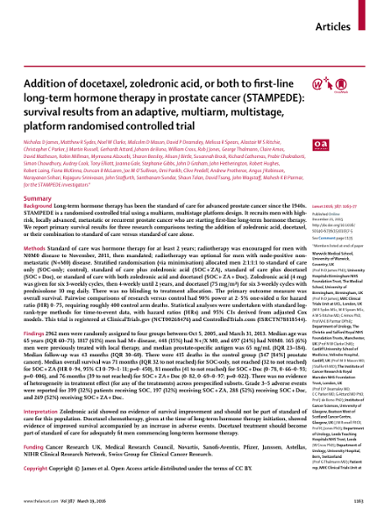 Background Long-term hormone therapy has been the standard of care for advanced prostate cancer since the 1940s. STAMPEDE is a randomised controlled trial using a multiarm, multistage platform design. It recruits men with high-risk, locally advanced, metastatic or recurrent prostate cancer who are starting first-line long-term hormone therapy. We report primary survival results for three research comparisons testing the addition of zoledronic acid, docetaxel, or their combination to standard of care versus standard of care alone. Methods Standard of care was hormone therapy for at least 2 years; radiotherapy was encouraged for men with N0M0 disease to November, 2011, then mandated; radiotherapy was optional for men with node-positive non-metastatic (N+M0) disease. Stratified randomisation (via minimisation) allocated men 2:1:1:1 to standard of care only (SOC-only; control), standard of care plus zoledronic acid (SOC + ZA), standard of care plus docetaxel (SOC + Doc), or standard of care with both zoledronic acid and docetaxel (SOC + ZA + Doc). Zoledronic acid (4 mg) was given for six 3-weekly cycles, then 4-weekly until 2 years, and docetaxel (75 mg/m2) for six 3-weekly cycles with prednisolone 10 mg daily. There was no blinding to treatment allocation. The primary outcome measure was overall survival. Pairwise comparisons of research versus control had 90% power at 2·5% one-sided α for hazard ratio (HR) 0·75, requiring roughly 400 control arm deaths. Statistical analyses were undertaken with standard log-rank-type methods for time-to-event data, with hazard ratios (HRs) and 95% CIs derived from adjusted Cox models. This trial is registered at ClinicalTrials.gov (NCT00268476) and ControlledTrials.com (ISRCTN78818544). Findings 2962 men were randomly assigned to four groups between Oct 5, 2005, and March 31, 2013. Median age was 65 years (IQR 60–71). 1817 (61%) men had M+ disease, 448 (15%) had N+/X M0, and 697 (24%) had N0M0. 165 (6%) men were previously treated with local therapy, and median prostate-specific antigen was 65 ng/mL (IQR 23–184). Median follow-up was 43 months (IQR 30–60). There were 415 deaths in the control group (347 [84%] prostate cancer). Median overall survival was 71 months (IQR 32 to not reached) for SOC-only, not reached (32 to not reached) for SOC + ZA (HR 0·94, 95% CI 0·79–1·11; p=0·450), 81 months (41 to not reached) for SOC + Doc (0·78, 0·66–0·93; p=0·006), and 76 months (39 to not reached) for SOC + ZA + Doc (0·82, 0·69–0·97; p=0·022). There was no evidence of heterogeneity in treatment effect (for any of the treatments) across prespecified subsets. Grade 3–5 adverse events were reported for 399 (32%) patients receiving SOC, 197 (32%) receiving SOC + ZA, 288 (52%) receiving SOC + Doc, and 269 (52%) receiving SOC + ZA + Doc. Interpretation Zoledronic acid showed no evidence of survival improvement and should not be part of standard of care for this population. Docetaxel chemotherapy, given at the time of long-term hormone therapy initiation, showed evidence of improved survival accompanied by an increase in adverse events. Docetaxel treatment should become part of standard of care for adequately fit men commencing long-term hormone therapy. Funding Cancer Research UK, Medical Research Council, Novartis, Sanofi-Aventis, Pfizer, Janssen, Astellas, NIHR Clinical Research Network, Swiss Group for Clinical Cancer Research.