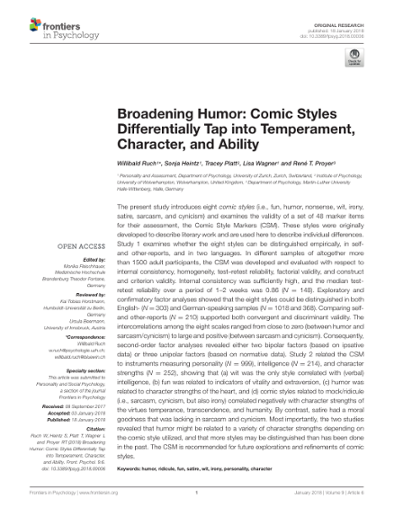 The present study introduces eight comic styles (i.e., fun, humor, nonsense, wit, irony, satire, sarcasm, and cynicism) and examines the validity of a set of 48 marker items for their assessment, the Comic Style Markers (CSM). These styles were originally developed to describe literary work and are used here to describe individual differences. Study 1 examines whether the eight styles can be distinguished empirically, in self- and other-reports, and in two languages. In different samples of altogether more than 1500 adult participants, the CSM was developed and evaluated with respect to internal consistency, homogeneity, test–retest reliability, factorial validity, and construct and criterion validity. Internal consistency was sufficiently high, and the median test-retest reliability over a period of 1–2 weeks was 0.86 (N = 148). Exploratory and confirmatory factor analyses showed that the eight styles could be distinguished in both English- (N = 303) and German-speaking samples (N = 1018 and 368). Comparing self- and other-reports (N = 210) supported both convergent and discriminant validity. The intercorrelations among the eight scales ranged from close to zero (between humor and sarcasm/cynicism) to large and positive (between sarcasm and cynicism). Consequently, second-order factor analyses revealed either two bipolar factors (based on ipsative data) or three unipolar factors (based on normative data). Study 2 related the CSM to instruments measuring personality (N = 999), intelligence (N = 214), and character strengths (N = 252), showing that (a) wit was the only style correlated with (verbal) intelligence, (b) fun was related to indicators of vitality and extraversion, (c) humor was related to character strengths of the heart, and (d) comic styles related to mock/ridicule (i.e., sarcasm, cynicism, but also irony) correlated negatively with character strengths of the virtues temperance, transcendence, and humanity. By contrast, satire had a moral goodness that was lacking in sarcasm and cynicism. Most importantly, the two studies revealed that humor might be related to a variety of character strengths depending on the comic style utilized, and that more styles may be distinguished than has been done in the past. The CSM is recommended for future explorations and refinements of comic styles.