Energy loss of solar p modes due to the excitation of magnetic sausage tube waves: importance of coupling the upper atmosphere 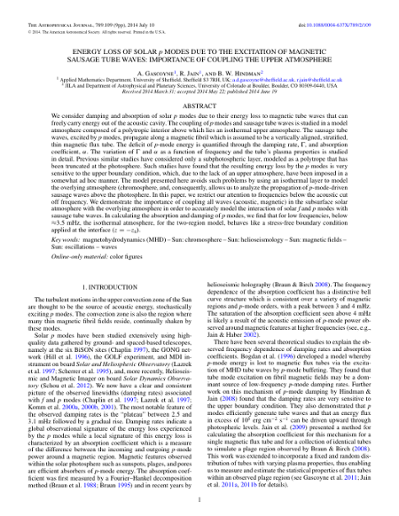 We consider damping and absorption of solar p modes due to their energy loss to magnetic tube waves that can freely carry energy out of the acoustic cavity. The coupling of p modes and sausage tube waves is studied in a model atmosphere composed of a polytropic interior above which lies an isothermal upper atmosphere. The sausage tube waves, excited by p modes, propagate along a magnetic fibril which is assumed to be a vertically aligned, stratified, thin magnetic flux tube. The deficit of p-mode energy is quantified through the damping rate, Γ, and absorption coefficient, α. The variation of Γ and α as a function of frequency and the tube's plasma properties is studied in detail. Previous similar studies have considered only a subphotospheric layer, modeled as a polytrope that has been truncated at the photosphere. Such studies have found that the resulting energy loss by the p modes is very sensitive to the upper boundary condition, which, due to the lack of an upper atmosphere, have been imposed in a somewhat ad hoc manner. The model presented here avoids such problems by using an isothermal layer to model the overlying atmosphere (chromosphere, and, consequently, allows us to analyze the propagation of p-mode-driven sausage waves above the photosphere. In this paper, we restrict our attention to frequencies below the acoustic cut off frequency. We demonstrate the importance of coupling all waves (acoustic, magnetic) in the subsurface solar atmosphere with the overlying atmosphere in order to accurately model the interaction of solar f and p modes with sausage tube waves. In calculating the absorption and damping of p modes, we find that for low frequencies, below ≈3.5 mHz, the isothermal atmosphere, for the two-region model, behaves like a stress-free boundary condition applied at the interface (z = –z 0).

Gascoyne, A., Jain, R. and Hindman, B.W. (2014) Energy loss of solar p modes due to the excitation of magnetic sausage tube waves: importance of coupling the upper atmosphere, The Astrophysical Journal, 789 (2):109

This is an accepted manuscript of an article published by American Astronomical Society in Astrophysical Journal on 19/06/2014, available online: https://doi.org/10.1088/0004-637X/789/2/109 The accepted version of the publication may differ from the final published version.