Abiraterone for prostate cancer not previously treated with hormone therapy 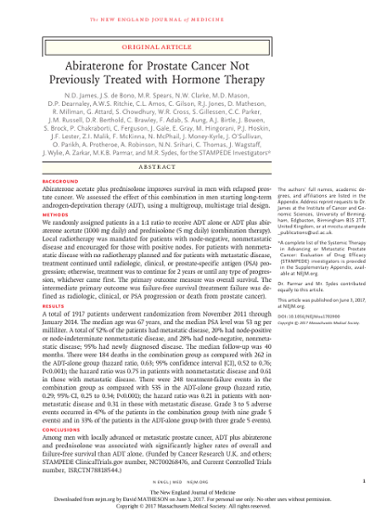 © 2017 The Authors. Published by Massachusetts Medical Society. This is an open access article available under a Creative Commons licence. The published version can be accessed at the following link on the publisher’s website: https://doi.org/10.1056/NEJMoa1702900

The Medical Research Council sponsored the study and was involved in the design and conduct of the study; collection, management, analysis, and interpretation of the data; and preparation, review, and approval of the manuscript. Funding was also provided by Cancer Research UK, Astellas, Janssen, Novartis, Sanofi-Aventis, and Pfizer, none of which were directly involved in the research
ae974a485f413a2113503eed53cd6c53
10.1056/NEJMoa1702900

Except where otherwise noted, this item's license is described as https://creativecommons.org/CC BY-NC-ND 4.0