Stretch intensity and the inflammatory response 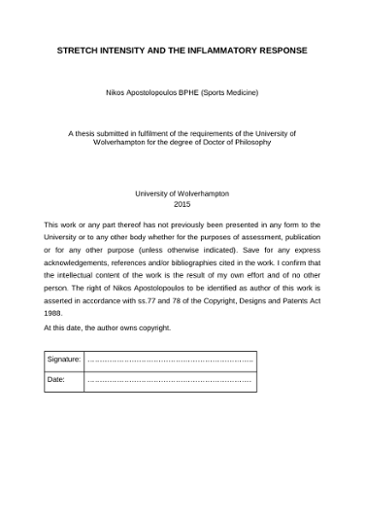 Background: Stretching may be viewed as an external/internal force influencing the range of motion of the connective tissue (muscles, tendons and the myotendon unit (MTU)) The magnitude and rate of stretching may potentially induce mechanical responses of the musculoskeletal system, such as increased range of motion (ROM). The degree of the intensity of stretch (low, medium, or high) may be used to optimize recovery from muscle damage via ameliorating inflammation; this is however, a plausible hypothesis that needs to be appropriately investigated. Aims: The present project aimed to investigate: 1) whether intense stretching (IS) causes an acute inflammatory response (study 1), 2) the effects of stretching intensity (low, medium, or high) in the onset of inflammation (study 2), and 3) investigate whether stretching intensity is responsible for aiding in the recovery of the muscle, post muscle damage (study 3). Methods: Studies one and two were randomized crossover trials consisting of 12 and 11 recreational male athletes, respectively. The former investigated whether high intensity stretching can cause an acute inflammatory response, with study two examining the effects of different stretching intensities (30%, 60% and 90%) based on a participant’s perceived maximum range of motion (mROM). Blood for both studies was collected at pre-, post, and 24h post intervention, and analyzed for high sensitivity C-reactive protein (hsCRP) (study 1 and 2), and for interleukin (IL)-1β, IL-6, and tumour necrosis factor (TNF)-α (study 1). In study three, a randomized controlled trial investigated whether stretching intensity (low or high), can influence the recovery from muscle damage. Thirty participants were randomized into three groups, a) low intensity stretching (LiS) (30-40% ROM), b) high intensity stretching (HiS) (70-80% ROM) and c) Control group. All participants performed both eccentric (EPT) and isometric peak torque (IPT) tests prior to a muscle damage protocol (MDP) (baseline). Participants were then assessed for EPT and IPT for three consecutive days post MDP. Soreness levels were recorded immediately post muscle damage and at 24, 48, and 72h, with blood samples collected at pre, 24, 48, and 72h post muscle damage and analyzed for Creatine Kinase (CK) and hsCRP. Results: Study one revealed a significant increase in hsCRP (P = 0.006) when comparing IS to Control condition, also confirmed by the effect size analyses. In study two, low (30% of mROM), and medium (60% of mROM) intensity stretching did not elicit an inflammatory response while a pronounced inflammatory response was observed when comparing 30 to 90 and 60 to 90% mROM. In study three, LiS showed a significant increase in EPT compared to both HiS and Control, and these findings were confirmed by magnitude based inferences analyses (i.e. LiS was associated with a positive effect for both IPT and soreness levels compared to Control and HiS). Blood biomarkers were associated with inconsistent effects compared to Control and HiS for all three-time periods. Conclusions: This thesis provides preliminary results suggesting that increased stretching intensity may be responsible for causing an acute inflammatory response. In addition, it was observed that LiS might be associated with faster recovery from muscle damage with respect to muscle function (EPT and IPT) and soreness levels. More research is needed to investigate these findings further.

A thesis submitted in fulfilment of the requirements of the University of Wolverhampton for the degree of Doctor of Philosophy.