Perceived managerial and leadership effectiveness in a Korean context: An indigenous qualitative study 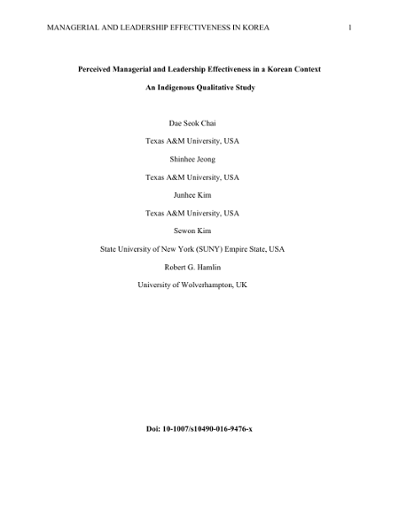 Multinational corporations (MNCs) across the world have sent an increasing number of managers abroad to leverage unprecedented opportunities in the era of globalization. However, their failure rate has been above 33% for decades, resulting in substantial costs (Puck, Kittler, & Wright, 2008). One of the primary reasons for this failure is a lack of understanding of the national and organizational cultures within the host countries (Festing & Maletzky, 2011). For example, while a number of MNCs have entered the Korean market, several such as Yahoo, Motorola, and Walmart have failed and withdrawn due to the companies’ lack of adjustment to the Korean cultural context (Choe, 2006; Woo, 2013). In spite of the significance of culturally embedded practices, most researchers who have explored management and leadership in Asian countries, whether they were Western or indigenous researchers, have implemented studies using extant Western management and leadership theories derived within the Western cultural context (Leung, 2007; Tsui, 2006). Numerous scholars have claimed that this could be problematic because the findings of such studies may not be applicable to non-Western countries (Li, 2012; Liden & Antonakis, 2009), and may fail to provide insights and understanding of novel contexts or to reveal indigenous aspects of management and leadership (Tsui, 2007). Consequently, there have been increasing calls for indigenous management and leadership research within Asian countries (see Li et al., 2014; Lyles, 2009; Tsui, 2004; Wolfgramm, Spiller, & Voyageur, 2014). Over the past 30 years, managerial effectiveness and leadership effectiveness have been substantially neglected areas of management research (Noordegraaf & Stewart, 2000; Yukl, Gordon, & Taber, 2002). In addition, there has been little agreement on what specific behaviors distinguish effective managers from ineffective ones. Furthermore, more research is needed to examine the managerial and leadership behaviors that are critical for shaping the performance of individuals, groups and organizations (see Borman & Brush, 1993; Cammock, Nilakant & Dakin, 1995; Mumford, 2011; Noordegraaf & Stewart, 2000; Yukl et al., 2002). While most of the research related to managerial and leadership effectiveness has been conducted in the U.S., the few notable non-U.S. studies include that of Cammock et al. (1995) in New Zealand who developed a behavioral lay model of managerial effectiveness using the repertory grid technique. Another notable exception is the cumulative series of perceived managerial and leadership effectiveness studies conducted by Hamlin with various indigenous co-researchers in Western and non-Western countries (see Hamlin & Patel, 2012; Ruiz, Wang, & Hamlin, 2013) using Flanagan’s (1954) critical incident technique (CIT).

Except where otherwise noted, this item's license is described as https://creativecommons.org/CC BY-NC-ND 4.0