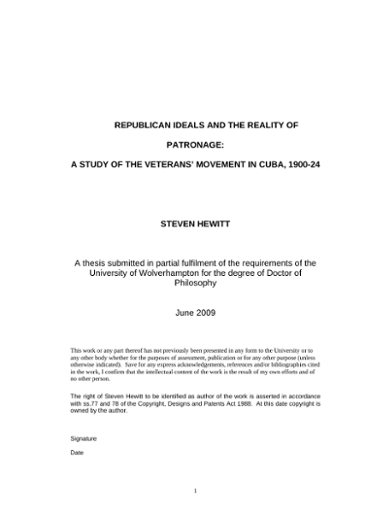 Republican ideals and the reality of patronage: a study of the Veterans’ Movement in Cuba, 1900-24

Hewitt, Steven (University of Wolverhampton, 2009)
This thesis analyses the emergence of Cuba as a sovereign nation, and the political corruption that plagued the republic. It investigates in detail, not only the independence movement that established this republic in its various wars against the Spanish empire, and its fracture and fission under the emerging power of the United States, but also the impact that this had on Cuban politics, and the consequences for Cuba’s native would-be rulers. The aim is to develop an understanding of what became of the veterans of the wars of liberation, and further the somewhat neglected subject of the relationship of the official Veterans’ organisations with the political parties and associations of the republican period. A short conclusion summarises the arguments and suggests further avenues of research. 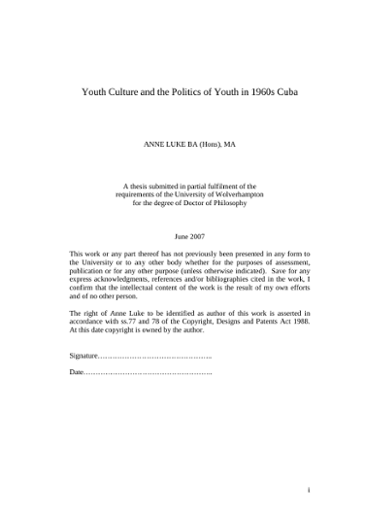 Youth Culture and the Politics of Youth in 1960s Cuba

Luke, Anne (University of Wolverhampton, 2007)
The triple coordinates of youth, the Sixties and the Cuban Revolution interact to create a rich but relatively unexplored field of historical research. Previous studies of youth in Cuba have assumed a separation between young people and the Revolution, and either objectify young people as units that could be mobilized by the Revolution, or look at how young people deviated from the perceived dominant ideology of the Revolution. This study contends that, rather than being passive in the face of social and material change, young people in 1960s Cuba were active agents in that change, and played a role in defining what the Revolution was and could become. The model built here to understand young people in 1960s Cuba is based on identity theory, contending that youth identity was built at the point where young people experienced – and were responsible for forging – an emerging dominant culture of youth. The latter entered Cuban consciousness and became, over the course of the 1960s, a part of the dominant national-revolutionary identity. It was determined by three factors: firstly, leadership discourse, which laid out the view of what youth could, should or must be within the Revolution, and also helped to forge a direct relationship between the Revolution and young people; secondly, policy initiatives which linked all youth-related policy to education, therefore linking policy to the radical national tradition stemming from Martí; and thirdly, influence from outside Cuba and the ways in which external youth movements and youth cultures interplayed with Cuban culture. Through these three, youth was in the ascendancy, but, where young people challenged the positive picture of youth, moral panics ensued. Young people were neither inherent saints nor accidental sinners in Cuba in the 1960s, and sought multiple ways in which to express themselves. Firstly, they played their role as activists through the youth organisations, the AJR and the UJC. These young people were at the cutting edge of the canonised vision of youth, and consequently felt burdened by a failure to live up to such an ideal. Secondly, through massive voluntary participation in building the Revolution, through the Literacy Campaign, the militias and the aficionados groups, many young people in the 1960s internalised the Revolution and developed a revolutionary consciousness that defines their generation today. Finally, at the margin of the definition of what was considered revolutionary sat young cultural producers – those associated with El Puente, Caimán Barbudo and the Nueva Trova, and their audience – who attempted to define and redefine what it meant to be young and revolutionary. These groups all fed the culture of youth, and through them we can start to understand the uncertainties of being young, revolutionary and Cuban in this effervescent and convulsive decade. 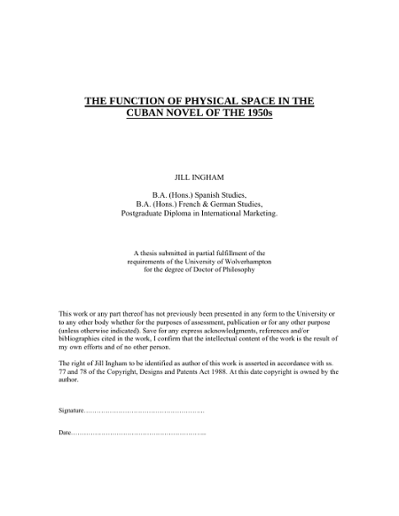 Ingham, Jill (University of Wolverhampton, 2007)
Long overshadowed by the subsequent 1960s ‘Boom’, Cuban novels of the 1950s have been confined to the backwater of literary analysis, often grouped together and dismissed as mere social realism like their Spanish counterparts, or described as inferior. The spatial has been similarly overlooked in literary analysis in favour of a focus on stylistic experimentation, narrative structure, characterisation and the temporal. More recently, however, theorists such as Mitchell (1980) and (1989), and Wegner (2002), have argued that literature has become increasingly spatial, and that a greater focus on spatial analysis is needed. Furthermore, conceptions of space in literature have moved from the static notion of ‘setting’ and identification within a specific location and time, to embrace the function of actual physical spaces, whether exterior or interior, public or private, embedded or liminal, juxtaposed, dynamic, static or fluid. One Cuban novel of the 1950s has already been discussed from a spatial perspective - El acoso (1956) by Alejo Carpentier. Using the two previous studies on spatiality in this novel as a starting point (Stanton [1993] and Vásquez [1996]), this analysis expands on the conclusions made by these studies, stressing the importance of water imagery, and demonstrating that spaces in El acoso are essentially dynamic and female-gendered, arguing that the crisis experienced by the acosado is actually one of masculine identity. Building on the expanded analysis of space in El acoso, three lesser-known Cuban novels of the 1950s are then considered from the perspective of space: Los Valedontes (1953) by Alcides Iznaga, Romelia Vargas (1952) by Surama Ferrer, and La trampa (1956) by Enrique Serpa. The socio-economic, political and cultural backcloth for the novels is set out, before an investigation into theories of space, both literary and non-literary, is conducted. Spaces in Los Valedontes reveal that in the rural domain, sexual identities are stable with conventional masculine hegemony virtually uncontested. Spaces in Romelia Vargas demonstrate that in the urban domain, female sexual identity, albeit historically suppressed, triumphs over the traditionally dominant male norm, whilst a study of spaces in La trampa demonstrates that not only are gangsters, policemen and homosexuals shown to occupy particularly challenged positions, but also that constructions of mainstream Cuban masculinity are under threat. The conclusion compares the function of spaces across all four novels, adding new insights into existing theories of literary space where appropriate. This thesis, therefore, tests the hypothesis that the manipulation of space in these novels constitutes material worthy of study, showing that spaces are dynamic and challenging when female-gendered, and constituting a threat to the hegemony exerted by traditional models of masculinity. Spaces in these novels demonstrate how the early part of the 1950s was a period in which an unpredictable array of contested positions was exposed through cultural, racial, gender and sexual stereotypes, leaving conventional norms of identity open to question.