Rios Reyes, Carlos A. (University of Wolverhampton, 2008)
Zeolites are among the least-known products for environmental pollution control, separation science and technology. Due to their unique porous properties, they are used in various applications in petrochemical cracking, ion-exchange and separation and removal of gases and solvents. The preparation of synthetic zeolites from chemical reagents is expensive. Therefore, in order to reduce costs, zeolite researchers are seeking cheaper aluminosilicate bearing raw materials, such as clay minerals, to produce synthetic zeolites. This research concerns the synthesis of zeolites and zeotypes derived from low-cost materials like kaolinite (KAO), natural clinker (NC) and fly ash (FA). The motivation for using these sources as the starting materials in zeolite synthesis is driven by factors, such as they are cheap and available in bulk quantities, are currently under-utilized, have high workability, and require less water (or solution) for activation. The raw materials were activated by two different routes: (1) classic alkaline hydrothermal synthesis and (2) alkaline fusion prior to hydrothermal synthesis. In the first method, the synthesis of zeolitic materials was carried out generally in alkaline media, although KAO or its calcination product, metakaolinite (MTK), was also activated in the presence or absence of structure directing agents (SDAs) and additional silica (precipitated SiO2), with the last one determining the SiO2/Al2O3 ratio of the reaction mixture and the time given for zeolitization. Synthesis in fluoride- and calcium-bearing media was also used to activate kaolinite. The process of synthesis was optimized by applying a wide range of experimental conditions with a wide range of reaction temperature, time, mineralizer concentration and solid/solution ratio. In the second approach, an alkaline fusion step was conducted prior to hydrothermal treatment, because it plays an important role in enhancing the hydrothermal conditions for zeolite synthesis. On the other hand, this approach was adopted because it can dissolve more aluminosilicates. The main synthesis products obtained after activation of KAO in NaOH solutions included zeolite LTA (LTA), sodalite (SOD), cancrinite (CAN), faujasite (FAU), zeolite Na-P1 (GIS), JBW-type zeolite (JBW), analcime (ANA), whereas the activation of KAO in KOH solutions produced chabazite (CHA), zeolite Barrer-KF, phillipsite (PHI) and K-feldspar. The hydrothermal conversion of kaolinite in fluoride media did not produce successful results, although traces of FAU, GIS, CHA, SOD and CAN crystallized. The activation of KAO in the system CaO-SiO2-Al2O3-H2O promoted the formation of different calcium silicate hydrate (C-S-H) phases, including hydrogarnet (HYD) and tobermorite (TOB). Following the fusion approach, the main zeolitic phases obtained using NaOH as mineralizer were LTA and CAN. The main as-synthesized zeolites obtained from NC by the conventional hydrothermal treatment method include PHI, SOD and CAN. Using the fusion approach, FAU and LTA were obtained with NaOH as an activator, whereas non-zeolitic material crystallized when KOH was used. The main as-synthesized zeolitic materials obtained by hydrothermal reaction of FA include PHI, zeolite Barrer-KF, CHA and SOD with traces of TOB, ANA, zeolite LTF (LTF) and herschelite (HER), appearing occasionally. By the fusion approach, FAU was obtained with NaOH as activator, whereas no zeolitic material crystallized using KOH. Experimental results indicate that the method, mineralizer, concentration and time have strong effects on the type and degree of crystallinity of the synthesis products. On the other hand, the type and chemical composition of the as-synthesized products are strongly dependent on the chemical composition of the starting material. The chemistry of zeolite synthesis was subject to perturbations caused by the presence of impurities in the raw materials, which may remain insoluble during crystallization and cause undesired species to nucleate, developing mixtures of different types of zeolites. However, other physicochemical factors may play a very important role in the thermodynamics and kinetics of zeolite formation. The raw materials have very high contents of SiO2 and Al2O3, with SiO2/Al2O3 ratios appropriate for the synthesis of low-Si zeolitic materials with high crystallinity and cation exchange capacity (CEC). However, although zeolites’ CEC represents a very important characteristic quality in the removal of undesired species from polluted effluents, it is not the deciding factor in determining zeolite performance during ion exchange processes, since numerous other factors also need to be considered. Finally, the potential application of the raw materials and their as-synthesized products as low-cost sorbents in the remediation of metal ions and ammonium from wastewater effluents was investigated. PHI showed a lower efficiency than FAU. Selectivity of FAU for metal removal was, in decreasing order, Fe>As>Pb>Zn>Cu>Ni>Cr. Based on these results, the use of these materials has the potential to provide improved methods for the treatment of contaminated effluents. 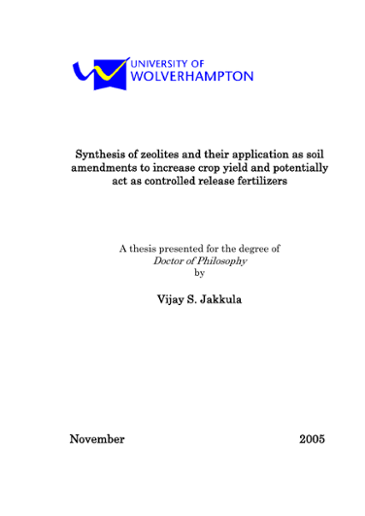 Synthesis of zeolites and their application as soil amendments to increase crop yield and potentially act as controlled release fertilizers.

Jakkula, Vijay S. (University of Wolverhampton, 2005)
Zeolites have been used in agriculture since the 1960s, due to the effectiveness of these crystalline microporous solids as soil amendments for plant growth, their cation exchange capacity (CEC) and slow-release fertilizer properties. Most work on slow-release fertilizers has focused on natural Clinoptilolite, Phillipsite and Chabazite. The aim of this study was to synthesize zeolites, study their effectiveness as soil amendments and their ability to act as controlled release fertilizers to decrease nitrate leaching. Nitrate pollution of groundwater is a major agro-environmental concern. The zeolites Phillipsite and Linde-type F were synthesized from aluminosilicate gels; ion exchanged to introduce ammonium and characterized using X-ray diffraction (XRD), X-ray fluorescence (XRF), Thermo-gravimetric analysis (TGA) and Scanning electron microscopy (SEM) techniques, both before and after ion exchange. Ammoniumexchanged Phillipsites (natural and synthetic), ammonium-exchanged synthetic Linde-type F (the zeolite having highest affinity towards ammonium) and ammonium exchanged Phillipsites (high crystalline and high aluminium) were compared with conventional NPK fertilizer.Three glasshouse experiments were performed to study the effects of zeolite-amended soils on maize growth. Ion exchanged synthetic and natural Phillipsites were first used as soil amendments (w/w 2, 4, 8% zeolite to soil). Synthetic Phillipsite, at 2% loading, resulted in the most significant improvement in both plant growth and phased ammonium release. The synthetic ammonium-exchanged zeolites Phillipsite and Linde-type F (at w/w 1, 2, 4%) were then compared; synthetic Phillipsite, at 2% loading, again resulted in the most significant plant growth response with an increase (≥15%) in shoot dry weight and a decrease (≥30%) in nitrate leaching. Experiments using unexchanged synthetic Phillipsite (at w/w 2%), but with added NPK fertilizer, showed increased plant growth and decreased nitrate leaching, compared with parallel experiments containing unexchanged synthetic Linde-type F (at w/w 2%) and a conventional fertilizer amended soil. This revealed the beneficial effect of Phillipsite for soil amendment, even without ion exchange to the ammonium form. To study the physico-chemical properties affecting the release of ammonium from the Phillipsite framework; high crystalline/low aluminium and low crystalline/high aluminium forms were synthesized and ion exchanged. Both forms were introduced as soil amendments (at w/w 1 and 2%) and experiments showed that the lower zeolite crystallinity decreased cation exchange and therefore decreased nitrate leaching. Experimental results from the glasshouse experiments and cation exchange capacity (CEC) experiments suggest that synthetic Phillipsite, at lower loadings (1 and 2% w/w zeolite to soil) have most potential as soil amendments for both plant growth and controlled-release applications. This conclusion is supported by soil leachate and shoots dry weight analysis. Furthermore, Phillipsite, synthesized in a low crystalline and low ammonium form, may be an even better soil amendment for controlled release of ammonium, which will thereby further decrease nitrate pollution. 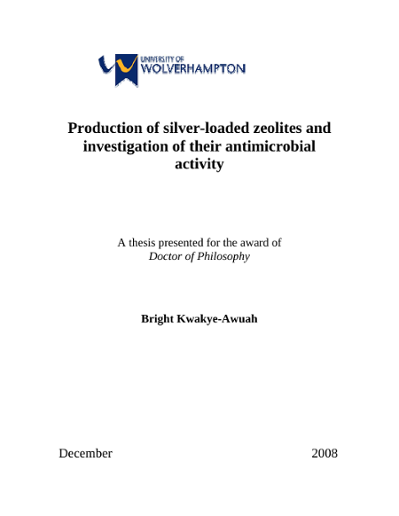 Production of silver-loaded zeolites and investigation of their antimicrobial activity