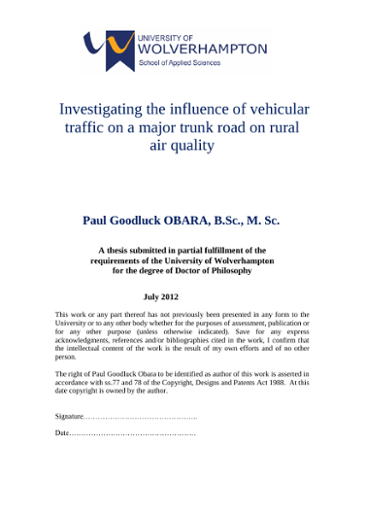 Traffic population in the UK has grown by 27% in 2002 and predicted to continue to an estimated 38% in 2016 and up to 60% by 2031. This means vehicular emissions from road transport may account for higher proportion of total emissions of pollutants resulting in air pollution with its attendant consequences. Although poor air quality concerns has often been linked to urban areas, many rural areas apparently have locations where air quality objectives may be threatened especially in the wake of increasing vehicular population. Thus, this elicits the necessity to investigate the relationship between vehicular emissions and air quality. This study investigated the influence of vehicular traffic on a major trunk road on rural air quality through continuous measurements of nitrogen dioxide, sulphur dioxide and hydrocarbon between June 2008 and April 2010 along a major trunk road in a catalogued rural environment in the UK. Collection and analysis of pollutants was by Dräger short-term tubes and Dräger passive diffusion tube techniques. Throughout the sampling period, concentrations of sulphur dioxide were not detected using the short-term tube technique but were detected by the passive diffusion tubes. The study found that variations in mean concentrations of the pollutants were synonymous with traffic frequency and were influenced by meteorological conditions especially wind speed, temperature and relative humidity. Results observed concentration decline trend with increasing distance and showed maximum concentrations during winter, mainly in areas of close proximity to anthropogenic source, and minimum in summer. Values between winter year 1 and winter year 2 monitoring campaigns showed significant difference (P<0.05 and R=0.91) as was in summer year 1 and year 2 (P<0.05 and R=0.94), spring year 1 and year 2 (P<0.05 and R=0.84) and autumn year 1 and year 2 (P<0.05 and R=0.79). When compared with the guidance limits, NO2 Page ii showed exceededance at roadside and 50 m, and at some sample sites, up to 100 m from the road. Conversely, SO2 did not show any exceedance but statistical analyses was mostly significant between concentrations and distance at p≤0.05, suggesting the variability of pollutants, as well as the influence of distance on their temporal and spatial distribution. Results also show that pollutants correlated very well with daily traffic population with strong positive r2 and R-values. Similarly, the study considered the application of hazel leave (Corylus avellana) and ryegrass (Lolium perenne) vegetation samples in monitoring rural air quality. Both samples were collected in different seasons and distances (5m, 50m, and 100m) from the A49 trunk road at four rural sites characterised with diverse traffic densities and anthropogenic activities. The aim was to determine the elemental content and trends within the samples and to investigate the influence of distance from the road, height from ground level, and sampling season on the elemental levels. The levels of Al, As, Ba, Ca, Si, Mg, S, Cd, Cr, Na, Ni, Sb, Se, Sn, Mo, Mn, C, K, P, Cl, Ti, Fe, Zn, and Pb were determined using X-ray fluorescence (XRF), inductively coupled plasma-mass spectrometer (ICP-MS), and Scanning Electron Microscopy-Energy Dispersive X-ray spectrometer (SEM-EDX). Results show that despite the traffic differentials between the sampling sites, the pollution level of heavy metals were generally low in all sampling site and concentrations of Cr, Cu, Ni, Pb, and Ti exhibited inverse relationship with distance, decreasing in levels with increasing distance from the trunk road. Although root uptake from the soil is a potential source of heavy metals, geochemistry research of the study area did not show any evidence that proves any major heavy metals deposit concerns in the soil. It is therefore possible that heavy metal emissions were deposited in a form that was not readily available for root uptake, thereby narrowing the presence of heavy metal pollutants to other potential Page iii sources. However, this study found high level of heavy metals at the roadside measurements in the order of Zn (0.703 ppm) > Ti (0.346 ppm) > Cr (0.111 ppm) > Cu (0.106 ppm) > Pb (0.026 ppm) > Ni (0.025 ppm). They were found in different magnitudes higher than their respective levels at 50 and 100 m from the trunk road and therefore tend to support traffic origin. Findings from this study show that heavy metals exhibited different degree of correlation between individual elements, ranging from very strong positive to weak, as well as negative correlations. Statistical analyses show that the elements predominantly exhibited statistically significant differences between elements and between distances from the road. Overall, findings from this study demonstrate that both vegetation species prove to be successfully useful in determining the pollution status and trends of traffic-related heavy metals.