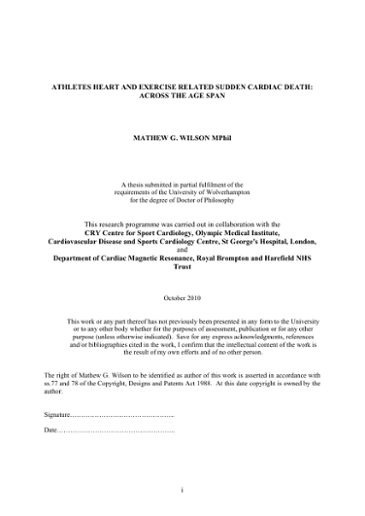 Background - Regular exercise reduces the risk of cardiovascular disease and subsequent sudden cardiac death (SCD). However, a small, but notable proportion of athletes die suddenly due to inherited or congenital disorders of the heart that predispose to malignant ventricular arrhythmias. Such tragedies are highly publicised, particularly when high-profile athletes are involved. To date, limited evidence for the efficacy of cardiovascular pre-participation screening exists outside of the Italian experience. Furthermore, limited data exists examining the impact of ethnicity on cardiac adaptations to physical training. Whilst the cardiovascular benefits of exercise are well known, the impact of life-long endurance exercise is less well understood. Long term high-intensity endurance exercise is associated with changes in cardiac morphology together with electrocardiographic alterations that are believed to be physiologic in nature. Recent data however, has suggested a number of deleterious adaptive changes in cardiac structure, function and electrical activity in response to life-long endurance activity. Aims and Objectives - The aims of this PhD were; 1) To find an effective preparticipation screening method that would successfully identify pre-existing cardiovascular abnormalities, 2) To identify the prevalence of hypertrophic cardiomyopathy and Long QT syndrome in elite UK athletes; 3) To examine the impact and significance of ethnicity upon left ventricular remodelling in elite athletes, and 4) To examine the acute and chronic impact of ultra-endurance exercise across the life-span in male endurance athletes. Major Results and Conclusions – 1) Study 2 sought to confirm the efficacy of resting 12-Lead ECG ‘alongside’ personal/family history questionnaires and physical examinations as collective tools to identify diseases that have the potential of causing sudden death within a cohort of elite junior athletes (n=1074) and physically active school children (n=1646). Nine participants were identified with a positive diagnosis of a disease associated with SCD. None of those diagnosed with a disease associated with SCD were symptomatic or had a family history of note. Thus, personal symptoms and family history questionnaires alone are inadequate in the identification of individuals with diseases associated with SCD. In conclusion, resting 12-Lead ECG is paramount when screening for diseases that have the potential of causing sudden death in the young. 2) Study 3 examined 3,500 asymptomatic elite athletes (75% male) with a mean age of 20.5 ± 5.8 years with 12-lead ECG and 2-dimensional echocardiography. None had a known family history of HCM. Of the 3,500 athletes, 53 (1.5%) had LVH (mean 13.6 ± 0.9mm, range 13 to 16mm), and of these 50 had a dilated LV cavity with normal diastolic function to indicate physiological left ventricular hypertrophy. Three (0.08%) athletes with LVH had a non-dilated LV cavity and associated deep T-wave inversion that could have been consistent with HCM. However, none of the 3 athletes had any other phenotypic features of HCM on further non-invasive testing and none had first-degree relatives with features of HCM. In conclusion, the prevalence of HCM in elite athletes is significantly less than in the general population; with the demands of strenuous exercise on the cardiovascular system selecting out most individuals with HCM. Study 4 examined 2000 elite athletes in order to identify the prevalence of Long QT syndrome. Three athletes had a QTc value of >500 ms and all exhibited one of: paradoxical prolongation of QTc during exercise, a confirmatory genetic mutation, or prolonged QTc in a first-degree relative. In contrast, none of the athletes with a QTc value of <500 ms had any other features to indicate LQTS. Accordingly, the prevalence of a prolonged QTc interval in elite British athletes is 0.4%. 3) Study 6 examined 300 nationally ranked UK black male athletes (mean age 20.5 years) in comparison to 150 black and white sedentary individuals and 300 highly-trained white male athletes. Black athletes exhibited greater LV wall thickness and cavity size compared with sedentary black and white individuals. Black athletes had greater LV wall thickness compared with white athletes. A minority of black athlete’s exhibit LVH ≥15 mm; proposing that in the absence of cardiac symptoms or a family history of HCM, an LV wall thickness ≥15 mm in black athletes may represent physiologic LVH when the LV cavity is enlarged and diastolic indexes are normal. 7 black athletes (12%) with LVH displaying deep T-wave inversions in leads V1 to V4. In conclusion, in the absence of obvious pathology, these electrical anomalies in black athletes likely represent a normal spectrum of ECG changes in response to physical training. 4) Study 8 examined 17 male participants (age 33.5 ± 6.5 years, 26–40 years) using cardiac magnetic resonance (CMR) and echocardiography before and after a marathon to investigate the relationship between systolic function and diastolic function against biomarkers of cardiac damage. Results demonstrates biomarkers of myocardial cell damage following an acute bout of prolonged exercise are not associated with either systolic or diastolic functional measures, and do not seem to be associated with any detectable myocardial inflammation, oedema, or scarring using either gold standard techniques of gadolinium enhanced CMR or echocardiography respectively. The impact of multiple episodes of prolonged exercise, as experienced by highly trained veteran endurance athlete is not fully understood. 5) Study 10 examined the cardiac structure and function of 12 life-long, competitive endurance veteran athletes (> 50 yrs, mean ± SD marathons 178 ± 209 (range 20 – 650)) against 17 young male endurance athletes (<40 yrs) using echocardiography and CMR with late gadolinium enhancement (LGE) to assess myocardial fibrosis. Lifelong veteran athletes had smaller LV and RV end-diastolic and end-systolic volumes (p<0.05) but maintained LV and RV systolic function compared with young athletes. In 6 (50%) of the veteran athletes LGE of CMR indicated the presence of myocardial fibrosis; no LGE in the young athletes. The prevalence of LGE in veteran athletes was not associated with the number of competitive marathons or ultra-endurance marathons (>50 miles) completed, age, LV and RV end-diastolic volumes or LV mass (p>0.05). In conclusion, there is limited evidence at present demonstrating that cardiovascular re-modelling following lifelong endurance exercise leads to long-term disease progression, cardiovascular disability or SCD.

For reasons of copyright, articles referred to in Appendices 1-10 do not appear as attached files.A thesis submitted in partial fulfilment of the requirements of the University of Wolverhampton for the degree of Doctor of Philosophy