Physical, cultural and cognitive interactions in the conception and production of the built environment 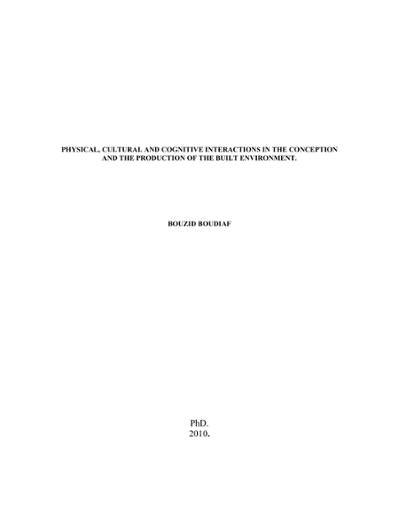 Architecture has been pushed towards the realms of theorization, conceptualization and design methodologies. It is apparent that design is becoming interrupted and more associated with the manufacturing of ideas. It has lost its essence as a phenomenon whose roots are embedded in history and man’s relationship with his specific habitat. Hence, the aim of the thesis is to redirect architectural attention to Ecology and its various implications on design. The study puts forward the notion that human achievements are an outcome of the interaction between ecology, Culture and Cognitive Structure. These relationships are thought to set the principles behind environmental qualities of stability, compatibility and fitness. Once designers arrive at an understanding of these principles, they will be able to manipulate their design ideas to accommodate ever changing circumstances of their physical and cultural environments. The title “Physical, cultural and cognitive interactions in the conception and the production of the built environment” implies a significant theme which could indicate major traits that characterize modern practices and theorisation within the area of Architectural and Environmental Design Studies. In this work, it will be seen why and how: First, a lack of consideration for the physical environment, its requirements and its role in producing diversified architectural forms. The most significant outcome of a such position lies in divorcing nature, its laws and the ecosystems on which man has spent the preceding history elaborating building patterns on the basis of utilising them for his interest free of charge and without consequences to his survival. The fact is that different cultures, ways of life and differentiated built environments, which can only be attributed to man’s adaptation to different ecological conditions, have been widely swept away under the mythical notion of “International style”. Second, because the architects and theorists of the contemporary architecture admire mental constructions and abstract philosophies of their own, they have advocated an alien and distorted meaning of the concept of culture. The most likely interpretation of this vital concept is that it is viewed as related to a kind of abstract intellectual capacity in the human brain that does not lend itself to variation in the physical setting. Tragically, the adoption of such view has resulted in sweeping away subcultures which have been developed in remote areas in accordance with their geographical setting. The most acceptable meaning of culture has been to imply the role of physical environment in shaping social relations, the modes of thought, norms, beliefs, ways of life, the ideologies and the total range of customary behaviour, all of which have been influenced by people’s adaptation to their environment. Therefore, building forms, patterns of growth, town morphology, in short, architectural phenomenon, has, like culture, evolved characteristics from its natural habitat. We now often observe that such an argument is totally diminishing in the present architecture and in the environmental activities of those in charge. Third, the interruption of continuity and flow of human cognitive knowledge by introducing techniques and thoughts whose practical values, aesthetical capacities and meanings do not correspond with people’s knowledge of the environment, building behaviour or activities associated with the history of people’s relation to their own habitat. This work is structured in two main parts; the first one will deal with the contribution of the different disciplines such as Ecology, Culture, Economy, Psychology, Architecture and Urban Design from the theoretical point of view in the development of the different concepts. In the second part, we will discuss the impact of these disciplines on the production of our built environment and we will end up by suggesting a model highlighting the interactions of these disciplines in the evaluation and the production of our built environment through a chosen case study which is Algiers. The main methods used in this study are: Descriptive for the first part which is dealing with the review of the current literature on Ecology, Culture and Cognition; Analytic for the proposed model and the case study; the third method is predictive and concerns the last part of this work.